Los Angeles Dodgers shut out Seattle Mariners on one hit, 1-0 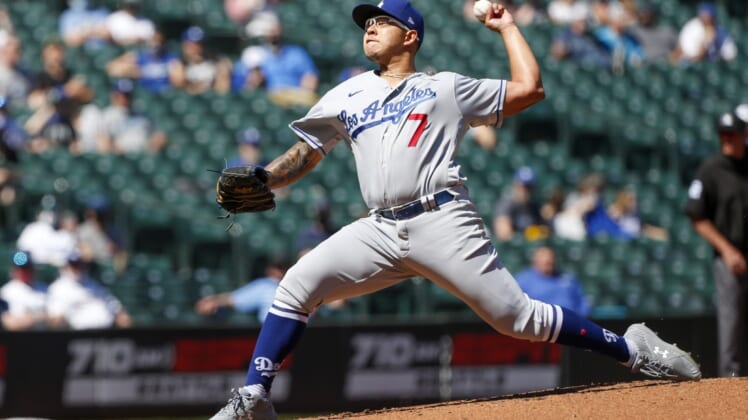 Corey Seager drove in the game’s lone run as the Dodgers snapped a two-game losing streak and earned a split of the two-game interleague series.

The only hit the left-handed Urias (3-0) allowed was an infield single by Mitch Haniger with two outs in the third inning. With the Dodgers employing a shift against the right-handed hitting Haniger, he hit a slow roller between first and second. Second baseman Max Muncy had been playing up the middle and although he reached the ball his throw to first did not beat Haniger.

Lefty Victor Gonzalez pitched the eighth inning for the Dodgers and right-hander Kenley Jansen worked the ninth for his fourth save.

Mariners left-hander Marco Gonzales (1-2) allowed one run on two hits in seven innings, with one walk and six strikeouts.

The Dodgers broke the scoreless tie in third. AJ Pollock led off with a soft liner just inside the third-base bag for a double. One out later, Austin Barnes walked on a 3-2 pitch. Mariners second baseman Dylan Moore made a diving catch on a liner by Chris Taylor to likely prevent a run, before LA shortstop Seager grounded a two-out single into center to score Pollock.

It was only the second loss for the Mariners in their past seven games, with both defeats coming by 1-0 scores.

The Mariners’ Kyle Lewis, the reigning American League Rookie of the Year, made his season debut after suffering a bone bruise on his right knee late in spring training while running into the outfield wall. Lewis was 0 for 3 with a walk.

The Dodgers’ Mookie Betts and the Mariners’ Ty France were absent from the starting lineup after they were each hit on the right forearm by pitches Monday. Tuesday, France struck out as a pinch hitter in the eighth inning and stayed in the game as a defensive replacement in the ninth.