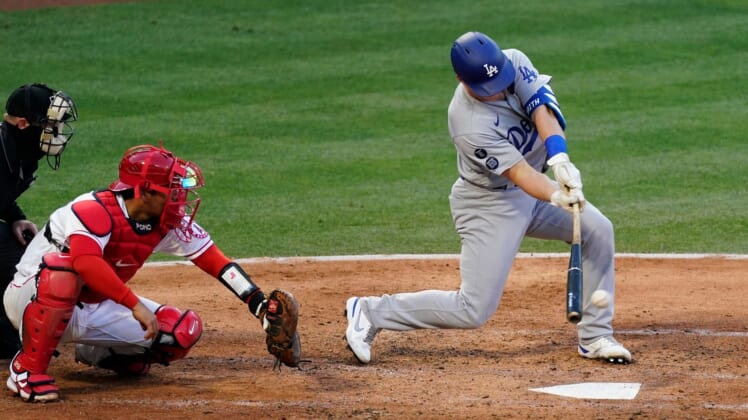 Clayton Kershaw threw five shutout innings to bounce back from the shortest outing of his career, and the Los Angeles Dodgers nearly blew a 13-run lead before holding on for a 14-11 win over the Los Angeles Angels on Saturday in Anaheim, Calif.

Mookie Betts had four RBIs and Will Smith drove in three for the Dodgers, who batted around twice while totaling 13 runs over the fourth and fifth innings.

The Angels rallied from the 13-0 hole, scoring four times in the sixth, and Jose Rojas’ three-run homer highlighted a seven-run seventh that got the hosts within three.

The Angels, though, would get no closer while losing for the sixth time in seven games. Their only victory in that span was a 9-2 decision over the Dodgers on Friday in the series opener.

The Dodgers, meanwhile, broke out after totaling 11 runs over the previous four games. They won for just the fifth time in 19 contests.

Kershaw (5-3) allowed four runs while lasting through only a 39-pitch first inning during a 7-1 loss to the Chicago Cubs on Tuesday. On Saturday, the three-time National League Cy Young Award winner was perfect through three innings and yielded just two hits and a walk while striking out five.

Angels starter Dylan Bundy (0-4) didn’t yield a hit through the first three innings, but only managed to get only one out while allowing six runs on five hits in the fourth. The Dodgers wound up scoring eight times in the frame, sending 14 batters to the plate. Matt Beaty came through with a two-run double and Betts plated two with a single to highlight the frame.

The Dodgers scored five more times in the fifth, when 10 men hit. They got two-run singles from Betts and Smith in that rally.

With Kershaw out of the game, though, the Angels made things interesting.

Jared Walsh had a two-run single in the sixth to help the hosts make it 14-4, and he delivered another run-scoring hit in the seventh. However, it was Rojas’ first-career home run, into the right field seats, that made it a ballgame.

The Angels were retired in order by Victor Gonzalez in the eighth and Blake Treinen in the ninth, with Treinen notching his first save of the season.