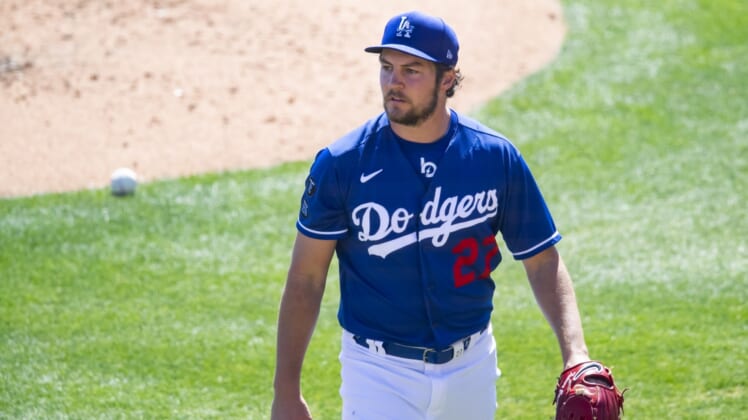 The Los Angeles Dodgers dominated the National League West for years before finally reaching the mountaintop, winning a World Series title in 2020, but it’s a precarious perch.

The Dodgers strengthened their bid to repeat by signing right-hander Trevor Bauer, the reigning NL Cy Young Award winner, to a three-year, $102 million contract in the offseason.

Bauer will make his Dodgers debut in the second game of their four-game series in Denver against the Colorado Rockies on Friday night, matched up against Rockies right-hander Antonio Senzatela.

Colorado won Thursday’s opener 8-5, a game that featured a base-running blunder by Justin Turner in the third inning that turned Cody Bellinger’s two-run homer into a run-scoring single.

Los Angeles catcher Austin Barnes left the game in the seventh inning after colliding with C.J. Cron on a play at home.

Dodgers manager Dave Roberts said after the game that Barnes’ right hand was spiked on the play but that Barnes should be able to play Saturday.

“Initially he was scared,” Roberts said. “It was his throwing hand, and he got a hand full of spikes. The hand has some cuts, but he’s going to be fine.”

Bauer went 5-4 last season and led the NL in ERA (1.73), complete games (two) and shutouts (two) to help the Reds reach the playoffs. Cincinnati didn’t hang around long, but joining the defending champs might lead to a longer stay in the postseason.

He doesn’t feel the outside pressure to succeed despite the high expectations.

“I know what kind of pitcher I am. I know how hard I work, how much knowledge I’ve amassed and how far I’ve come,” Bauer said during spring training. “If I have something to prove, it’s to myself — always. I hold myself to a much higher standard than anyone else holds me to. People can say what they want to say — it doesn’t really matter.”

Bauer spent most of his career in the American League, but he is familiar with the Rockies. In three career starts against them, he is 0-1 with a 3.86 ERA, and he has made one unsuccessful start at Coors Field. He allowed four runs on five hits and walked five in 3 1/3 innings on June 7, 2017, while with the Cleveland Indians.

Senzatela’s first start was moved up after Kyle Freeland went on the injured list because of shoulder soreness. Senzatela was sidelined for two weeks during spring training due to a hamstring strain, but he looked good in his final Cactus League start on March 26.

The righty got 10 ground-ball outs in five innings, a good sign for a pitcher who calls Coors Field his home.

“I feel really good, and I feel like I’m working really good,” Senzatela said after the outing.

It took a few years and a couple of hiccups for Senzatela to establish himself in the Rockies’ rotation. He was one of the bright spots last season, going 5-3 with a 3.44 ERA in 12 starts, and he finished 3-0 with a 2.10 ERA at home.

He was 1-1 with a 4.76 ERA in three starts against the Dodgers last season and has had some mild success against the NL West rivals.

Overall, he is 3-3 with a 5.74 ERA in 10 career appearances (eight starts) against Los Angeles and is 3-0 with a 3.86 ERA in three career starts at Coors Field against the Dodgers.