All is not completely lost for struggling Los Angeles Dodgers closer Kenley Jansen, who will not be utilized in Friday’s game against the Colorado Rockies no matter the game-ending scenario.

But the franchise’s all-time leader in saves with 333 will not be removed from his role permanently, manager Dave Roberts said, despite blowing his last three save opportunities. The recent rash of blown saves includes two consecutive that resulted in defeats to the San Francisco Giants this week.

“He was going to be down (Friday) regardless, and I am not reconsidering his role,” Roberts said.

Trailing 3-1 in the ninth inning Thursday, the Giants loaded the bases against Jansen on two hits and a walk, with the right-hander visibly overthrowing on some pitches.

The Giants pulled within a run when the Dodgers’ middle infield failed to execute a force play at second base that would have ended the game. The tying run scored on Darin Ruf’s walk when first-base umpire Ed Hickox ruled that Ruf checked his swing on a full-count pitch. Roberts argued the call and was ejected.

The Giants took a 5-3 lead on a two-run single from LaMonte Wade Jr. before Jansen was removed. 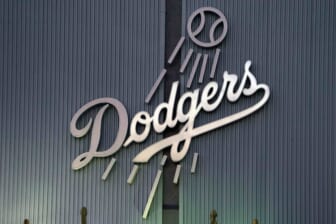 Had Jansen been able to protect leads of one run and two runs on Wednesday and Thursday respectively, the Dodgers would be in first place. Instead, they are three games behind the rival Giants after losing three of four games in the home series.

“I thought the play at second base, if we stretch, he’s out, and the game is over,” Roberts said. “The check swing, the game is over, and we’re not having this conversation (about Jansen).”