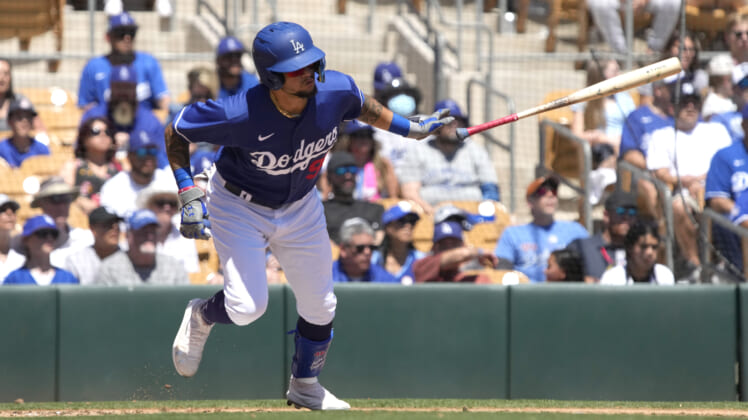 Despite being over three years younger than the average ballplayer in Double-A ball, at 21 years old, Los Angeles Dodgers prospect Andy Pages (pronunciation believed to be PAH-hayss) has proven to be far ahead of his peers in his first fifteen games of the year.

Pages, the 67th-rated prospect on the MLB top-100 prospect list, isn’t like most highly-touted players playing for minor-league affiliates across baseball. Usually, players of his caliber arrive via the annual Major League Baseball draft, but not Pages.

Instead, the Dodgers signed Pages for $300,000 as a 17-year-old raw prospect out of La Habana, Cuba in 2017 and have been working to develop the hot-hitting outfielder ever since.

Once a ball of clay, now the advanced skillset of Pages is beginning to show its polish. That 60-grade power his scouting report speaks of? Oh yeah, it’s real. Not only has Pages hit a total of 50 home runs across his last two seasons in Rookie and High-A ball (183 games), his bat has also shown up in AA-ball in his first 69 plate appearances of the year in 2022.

It’s a hot start, but it’s a small sample size. Meaning he could still tail off as we’ve seen from several other prospects who hit a hot streak, but there’s reason to believe this is just the beginning for the versatile outfielder.

Best of Andy Pages yet to come

The fascinating part about Pages is that we’ve likely yet to see his best form. Having shown growth in each of his seasons as he’s climbed up through the MiLB ranks, Pages continues to mash, no matter the level of competition he faces.

In 2019, Pages managed to hit for a .298 batting average, with 19 home runs, good for an OPS of 1.049. Not bad, his effort earned him MVP honors at the A+ level. Then in 2021 after losing a season due to the cancelation of minor league games (COVID), Pages came back with a lower average, only hitting .265, but he still managed to crank 31 dingers.

Pages has a quick swing and plenty of oomph in his bat, the next step may be getting his 24% strikeout rate down, but a power hitter of his caliber, the Dodgers will likely take the highs with the lows. To his credit, Pages has taken walks at a much higher rate as he’s matured.

While it’s not as sexy as the longball, Pages also has a rocket arm and while his speed is passable in center, expect to see Pages starring in the corner outfield in the big leagues before long.

Yet, stuck on the Dodgers with plenty of stars ahead of him, it might not happen until 2023. Of course, Pages’ effort has not gone unnoticed, and there’s always the possibility of a trade with the Dodgers frequently involved in trade talks. For now, he’ll look to continue haunting opposing pitchers on the mound as they experience the whiplash involved with his sweet home run swing.