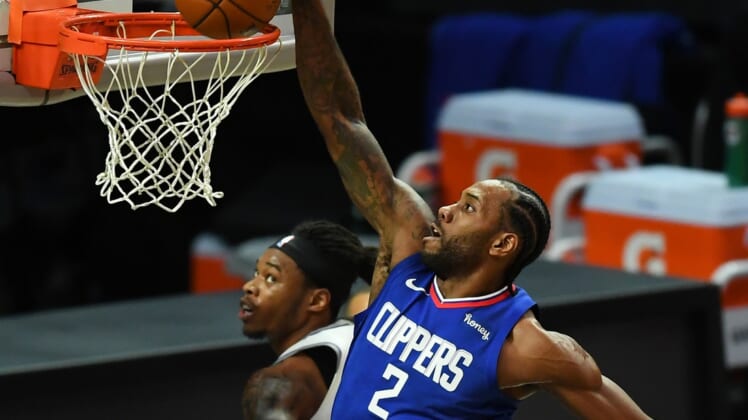 Third-quarter spurts have boosted the Los Angeles Clippers during their five-game winning streak.

“The third quarter, (we) just come out and try to set the tone defensively,” Clippers coach Tyronn Lue said after his club posted a 115-96 win over the Sacramento Kings on Wednesday in Los Angeles. “I thought we did a good job with that.”

The Clippers will try to extend their run when they host the Oklahoma City Thunder in the first of back-to-back contests on Friday and Sunday.

Against the Kings, Kawhi Leonard had 32 points and five assists. He also recorded six of the Clippers’ 14 steals. Leonard ranks second to Cleveland’s Larry Nance in steals at 2.1 per game.

“(Zubac) was big for us,” Lue said. “His size and strength around the basket was huge for us, especially when they were blitzing the pick-and-roll.”

The Los Angeles Clippers have been blitzing opponents in the third quarter. In their last three wins, the Clippers have outscored the opposition by an average of 110-55. Leonard’s 12 points helped them best the Kings 34-19 in the third for a 95-75 advantage heading into the fourth. Sacramento got no closer than 11 the rest of the way.

The Thunder have played well on the road, compiling a 5-2 mark. However, the start of this five-game trip didn’t begin. The Thunder lost 119-101 in Denver to the Nuggets on Tuesday. Luguentz Dort scored 20 points on 8-of-11 shooting, including 3-of-6 3-pointers, with five rebounds, while former Clippers player Shai Gilgeous-Alexander finished with 14 points, seven assists and five rebounds for the Thunder, who have dropped three of their last four contests. Isaiah Roby chipped in 10 points, nine rebounds and four steals.

Oklahoma City trailed 65-52 at the break before Denver seized command in the third quarter, outscoring the Thunder 32-22 for an 97-74 lead.

“Tonight, the way they play defensively, they’ve got their big up in pick-and-roll coverage, and they’ve got really active hands and they really force you to throw precision passes and really take care of the ball,” Thunder coach Mark Daigneault said. “They slap, they reach and they grab, and they’re pretty disruptive with it. It was something that obvious gave us problems tonight.”

The Nuggets forced 19 Thunder turnovers. They also outrebounded the Thunder 63-55, including an 18-9 edge on the offensive end.

“That’s the reason why they’re a good team,” Daigneault said. “They make you do everything well, and obviously we didn’t do that well enough in terms of getting rebounding. We did try to address it at halftime. I thought the guys did make a concerted effort to move forward there, but it was a little too much.”