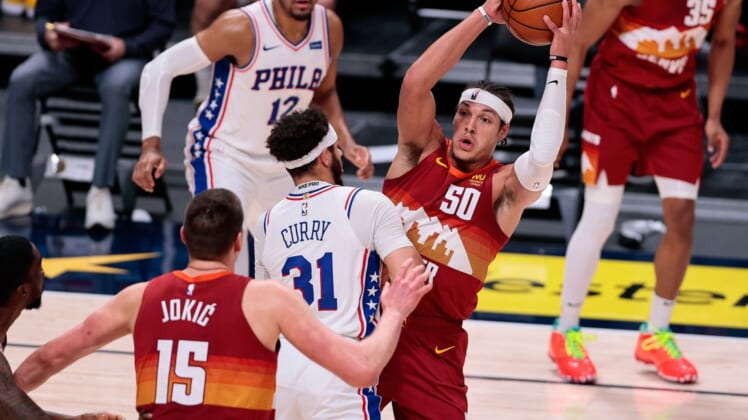 After squandering a double-digit lead in a loss to one of the bottom feeders of the Eastern Conference in the Orlando Magic on Tuesday, the Los Angeles Clippers will try to get back on track at home against the streaking Denver Nuggets.

Luke Kennard said he didn’t believe the loss to the Magic was a trap game — that the Clippers took Orlando lightly looking ahead to a tough matchup against the Nuggets.

“Not at all,” Kennard said. “We’re not a team to do that. We’re not a team to overlook anything. We focus in every day, game day or non-game day. We’re locked in as a team and as group. We want to get better and build good habits.”

The Clippers had won six in a row before the loss to the Magic and are playing their fourth game of a nine-game homestand.

Swingman Paul George did not play for a second straight game against Orlando due to foot soreness. Marcus Morris Sr. was a late scratch in that same game with a calf contusion. Guard Patrick Beverley (right knee soreness) and Serge Ibaka (lower back soreness) also remain out.

And newly acquired point guard Rajon Rondo has not played for the Clippers since joining the team in a trade last week due to a right abductor soreness.

“It is what it is right now until guys get healthy,” Lue said. “We’ve got to continue to try and keep playing the same — the right way offensively and defensively without wearing out guys out.”

Nikola Jokic is stating his case for the MVP as the Nuggets have won 12 of their past 15 games. The talented big man is averaging 26.8 points, 11.1 rebounds and 8.5 assists.

The Nuggets will look for a bit of revenge in the team’s second meeting against the Clippers this season. L.A. manhandled Denver on Christmas Day, 121-108 in Denver.

“They’re a terrific team,” Nuggets head coach Mike Malone said. “They beat us pretty good on Christmas night. So, hopefully in a couple nights we can give them a much better effort than we did in that holiday game.”

Denver made some noise at the trade deadline by adding Aaron Gordon and JaVale McGee. Their presence gives the Nuggets much more versatility on defense, with Gordon able to guard talented scorers on the perimeter and McGee protecting the rim inside the paint.

“The biggest thing is the defensive versatility and athleticism that he brings,” Malone said about Gordon. “Against Atlanta, you saw him switching out on a guy like Trae Young and being able to guard on the perimeter. And even if he gets beat, he has the size, strength and length to be able to get back into the play and make it tough for them.”

Denver point guard Monte Morris has missed 10 games in a row with a thigh injury and is questionable for Thursday’s game against the Clippers.