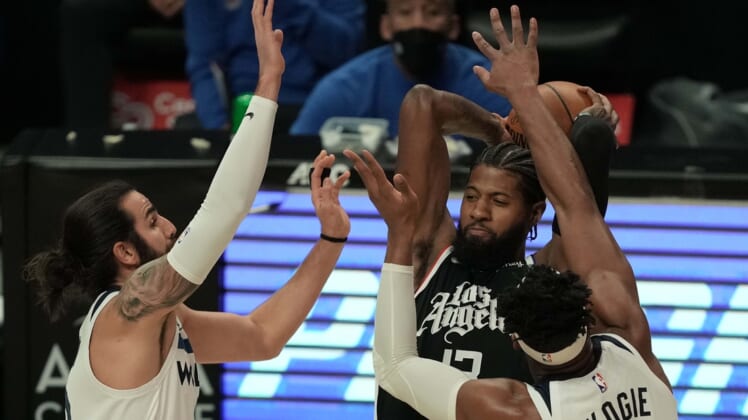 The Los Angeles Clippers backed up their standing as the top 3-point shooting team in the NBA and cruised to a 124-105 victory over the visiting Minnesota Timberwolves on Sunday.

The Clippers made half of their 42 attempts from 3-point range and led by as many as 38 points in the easy victory. Los Angeles entered 42.0 percent from distance as a team.

The Clippers had 104 points by the end of the third quarter and have not lost a game when they scored at least 100 points through three quarters since 1989.

Hot-shooting Paul George led the Clippers offensively with 23 points on 9 of 17 from the field and 4 of 9 from 3-point range. He added and seven rebounds, but his streak of five consecutive games with 30-plus points came to an end.

Kawhi Leonard returned to the Clippers’ starting lineup after a four-game absence due to a foot injury and finished with 15 points, 11 rebounds and eight assists in 23 minutes.

Slowed by injuries at different points of the season, Leonard and George played their 37th game together this season. The Clippers improved to 23-8 at home this year.

Towns appeared to suffer a right knee injury early in the fourth quarter, coming down awkwardly after taking a shot in the paint, but remained in the game.

The Timberwolves struggled offensively, shooting 40.9 percent from the field.

The Clippers led Minnesota 23-1 in second-chance points and 48-37 in rebounds.

Minnesota dropped the first of a four-game road trip that moves on to Sacramento for a pair of games and fell to a league-worst 5-24 on the road this season.

The Clippers welcomed a limited number of fans for the first time this season, with an announced attendance of 1,734 at Staples Center.