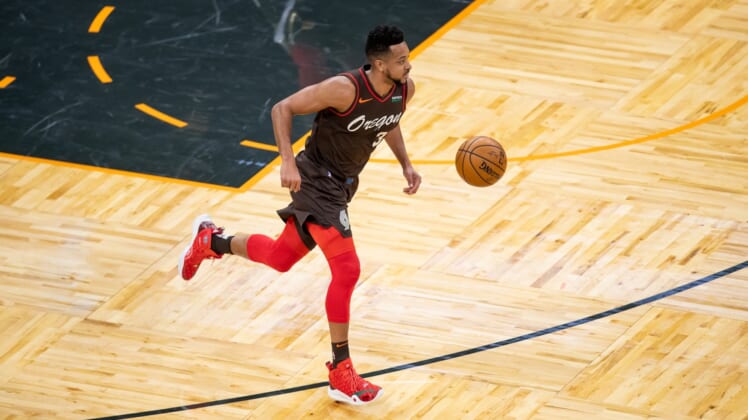 Despite missing two starters because of injuries, the Los Angeles Clippers easily handled the short-handed Los Angeles Lakers in a wire-to-wire, 18-point victory on Sunday.

Now, the Clippers will host the Portland Trail Blazers on Tuesday in the sixth game of the team’s nine-game homestand, looking to maintain the momentum.

Patrick Beverley (right knee soreness) and Serge Ibaka (lower back soreness) have missed a combined 34 games. However, the Clippers have done a good job of finding other contributors to fill the void on both ends of the floor in role players such as Terance Mann, Luke Kennard, Reggie Jackson and Patrick Patterson.

The Clippers also got their first glimpse of Rajon Rondo on the floor since making the trade with the Atlanta Hawks.

Rondo finished with two points, three assists, two steals and four turnovers in 13 minutes. However, Clippers coach Tyronn Lue said it was good to see Rondo out on the floor. The veteran point guard had been recovering from a sore right adductor.

“He was a little rusty,” Lue said. “He had a couple turnovers early on. But you could just tell his pace brings something different to our team. Offensively, if we’re getting the outlet close to half court before the first pass is made, that generates pace for us, and we need that.

“So, it’s going to be good for us in the long run. It was just good to see him out there and trying to get acclimated to what we do.”

Added Rondo: “I’m just going out there and leading by example. I don’t like to talk as much without showing out there on the court with my teammates.”

The Blazers arrive in Los Angeles playing good basketball, having won seven of their past 10 games, including a 48-point home victory against the Oklahoma City Thunder on Saturday.

Portland finished with eight players in double figures in that contest, led by CJ McCollum’s 20 points.

Portland rebounded from a disheartening 127-109 loss to the Milwaukee Bucks on Thursday with the easy victory over the Thunder.

However, Trail Blazers head coach Terry Stotts knows defeating the Clippers on the road will be a tough task. Los Angeles is 18-8 this season at Staples Center.

“The Clippers are a tough team on the road,” Stotts said. “I don’t know if this will necessarily carry over, but it was good to bounce back from the Milwaukee game, play a good defensive game and allow the subs to play, allow us to rest some of the starters. So, in that sense, it was really good for us.”

One player who appears set up to play well for the Blazers against the Clippers is McCollum. He’s averaging 27.0 points, 6.2 assists and 4.3 rebounds in 10 road contests this season, compared to 21.5 points, 3.8 assists and 3.4 rebounds at home.

“I just try to take the shots that were there, be aggressive in pick and rolls,” McCollum said about his performance against the Thunder. “Nurk (Jusuf Nurkic) set some great screens for me tonight. I left some point out there, but it happens.