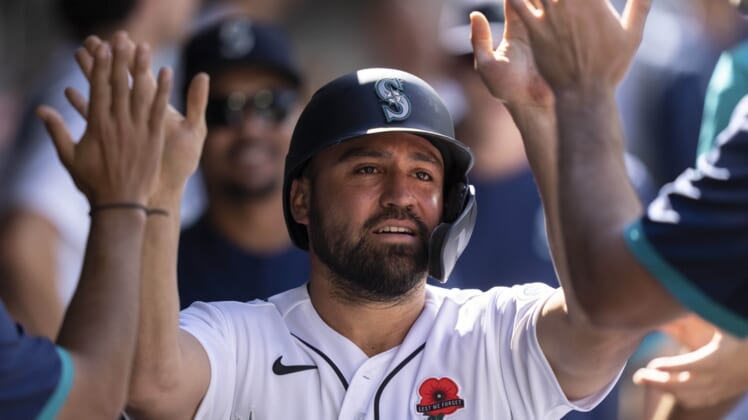 May 31, 2021; Seattle, Washington, USA; Seattle Mariners second baseman Jack Mayfield (8) is congratulated by teammates in the dugout after scoring a run on a hit by first baseman Ty France (23) (not pictured) during the tenth inning against the Oakland Athleticsat T-Mobile Park. The Mariners won 6-5 in 10 innings. Mandatory Credit: Stephen Brashear-USA TODAY Sports

The Los Angeles Angels claimed infielder Jack Mayfield off waivers from the Seattle Mariners on Sunday and optioned him to Triple-A Salt Lake.

Six weeks ago, the Mariners had claimed Mayfield off waivers from the Angels. Mayfield saw action in two games for Los Angeles in April.

He appeared in 11 games for the Mariners since being recalled from Triple-A Tacoma on May 19, hitting .176 (6-for-35) with three RBIs. This week he was designated for assignment when Seattle acquired infielder Jake Bauers from the Cleveland Indians.