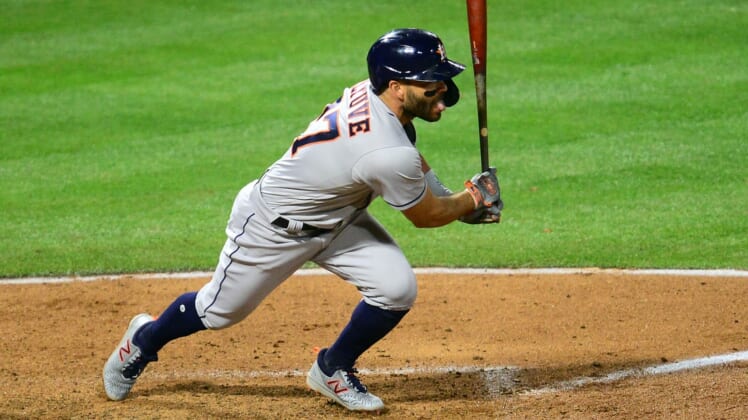 The Los Angeles Angels scored four runs in the bottom of the eighth inning to rally past the Houston Astros 7-6 Monday in Anaheim, Calif., handing the Astros their first loss of the season.

Angels center fielder Mike Trout homered, singled, walked twice, scored a run and drove in another, but the eighth-inning outburst was a team effort.

Trailing 5-3 going into the eighth, the Angels got the winning rally started by Albert Pujols and Jose Iglesias, who both singled off Astros reliever Joe Smith (0-1). Pinch hitter Shohei Ohtani was hit a pitch, loading the bases.

Left-hander Blake Taylor replaced Smith, but the Angels put the ball in play to push the four runs across. Dexter Fowler singled home a run, David Fletcher had an RBI on a fielder’s choice, Jared Walsh also had an RBI fielder’s choice, and after an intentional walk to Trout, Anthony Rendon added a sacrifice fly.

The Astros’ Kyle Tucker homered off Angels reliever Mike Mayers, who managed to finish it off for his first save. Angels reliever Tony Watson (1-0) got the win over Smith.

The Astros started fast, getting consecutive singles by Altuve, Gurriel and Bregman to begin the game, taking a 1-0 lead against Angels starter Jose Quintana.

One out later Correa singled home the second run, and Houston added a third on a wild pitch. Aledmys Diaz struck out for what should have been the third out, but the ball got past catcher Kurt Suzuki, allowing Yordan Alvarez to score.

Altuve’s one-out RBI single in the fourth inning gave Houston a 4-0 lead and knocked Quintana out of the game in his Angels debut.

The Angels got on the scoreboard against Astros starter Luis Garcia in the bottom of the fourth when Trout led off with his first homer of the year. They added another run in the inning on Iglesias’ RBI single, cutting their deficit to 4-2.

The Angels closed to within 4-3 in the fifth inning on Upton’s RBI single, but the Astros pushed their lead to 5-3 in the sixth on an RBI single by Alvarez.