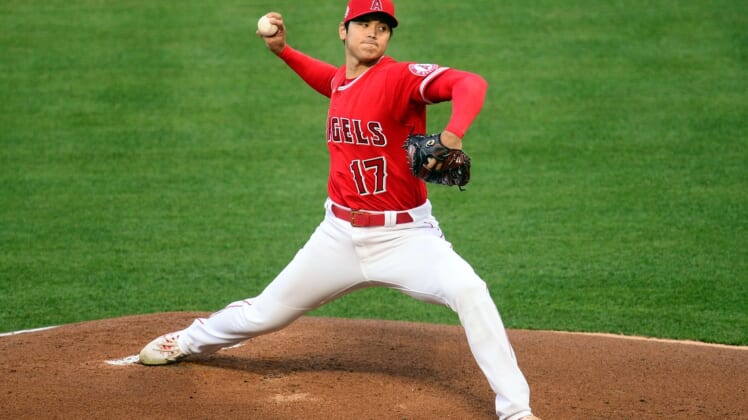 Mike Trout, Albert Pujols and Kurt Suzuki each homered to lift the Los Angeles Angels to a 6-2 victory over the Texas Rangers Tuesday night in Anaheim, Calif.

Trout’s home run in the sixth inning was his team-leading fifth of the season and No. 307 of his career. Pujols’ homer in the seventh inning was No. 664, fifth on the all-time list.

Trout also doubled and singled to lead an Angels offense that had eight hits in all.

Angels starter Shohei Ohtani, working on a limited pitch count, found trouble almost immediately, walking the bases loaded with one out in the first. But he escaped by striking out Nick Solak and Willie Calhoun in succession.

Ohtani, who had not pitched since April 4 because of a blister on his finger, gave up only one hit — a single by Brock Holt in the second — but had trouble with the strike zone, walking six. He was finished after four innings and 80 pitches, but did not allow a run and struck out seven.

Angels right fielder Scott Schebler, making his first start of the season after being called up last Friday, doubled to lead off the third inning against Rangers starter Jordan Lyles (1-1). Schebler scored later in the inning on a sacrifice fly by David Fletcher to give the Angels a 1-0 lead.

The Angels added to their lead in the fourth when Trout doubled and later scored on a wild pitch by Lyles.

After Solak’s solo homer in the sixth got the Rangers to within 2-1, Trout’s homer in the bottom of the inning put the Angels back up 3-1.

In the seventh, Rangers shortstop Isiah Kiner-Falefa tripled with one out but was still at third with two out. Joey Gallo then took advantage of the Angels’ defensive shift, dropping a bunt toward third base, easily beating it out for an infield single to score Kiner-Falefa and cut their deficit to 3-2.

The Angels gave themselves some breathing room in their half of the seventh with three runs, getting a solo homer from Pujols and a two-run homer from Suzuki. Pujols’ homer was his second of the season.

Griffin Canning (1-1) earned the win on the mound with 2 1/3 innings of relief for Los Angeles.