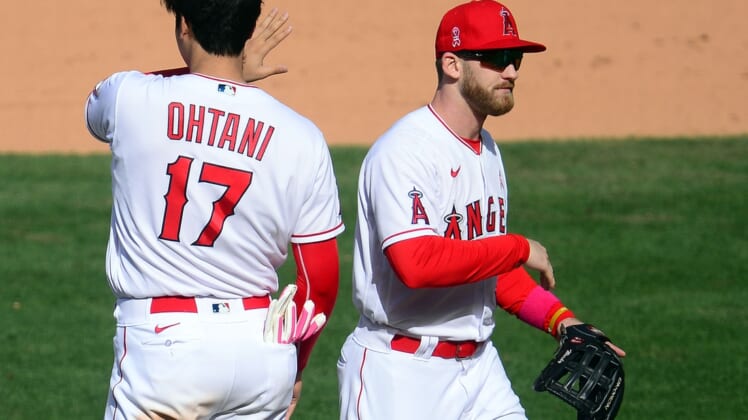 Jared Walsh hit a two-run double and the Los Angeles Angels held on to beat the Los Angeles Dodgers 2-1 on Sunday afternoon in the rubber game of a three-game series in Anaheim, Calif.

Angels starter Jose Quintana walked five and struck out six over four innings, allowing two hits and one run as six pitchers shut down the Dodgers on four hits.

Right-hander Aaron Sledgers (2-0) got the win by pitching 1 1/3 innings of scoreless relief. Alex Claudio and Tony Watson then combined to hold the Dodgers scoreless through the sixth and seven innings before Mike Mayers struck out three and walked one in in the eighth.

The Dodgers put two runners on with one out in the ninth against Angels closer Raisel Iglesias, but he got the final two outs for his fifth save.

David Fletcher and Phil Gosselin had two hits each for the Angels.

Corey Seager had three of the Dodgers’ four hits in the game.

Bauer retired the first two batters in the third inning before Fletcher reached on an infield single.

Shohei Ohtani and Mike Trout walked to load the bases before Walsh hit a two-strike pitch down the right-field line that hopped over the fence for a ground-rule double, driving in two runs for a 2-1 lead.

Quintana had escaped first-inning trouble when he walked three to load the bases but Chris Taylor lined out to left to end the inning.

Quintana walked two more in the third and Taylor came through with a line-drive single to center to drive in Justin Turner for a 1-0 lead.

But that would be it for the Dodgers, who had several opportunities with nine walks, but they left 12 runners on base, and were just 1-for-11 with runners in scoring position.