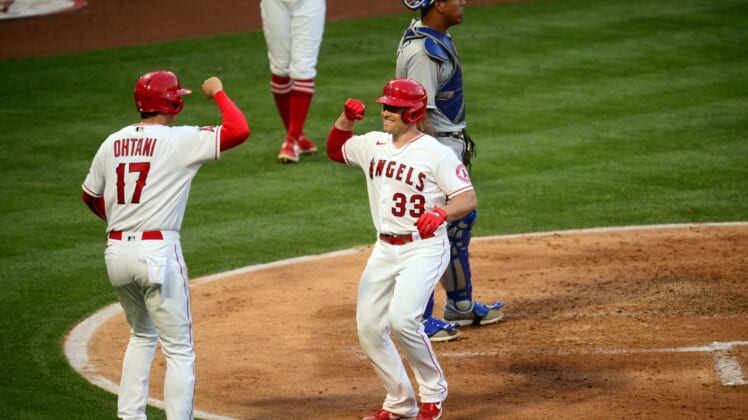 The Los Angeles Angels hit five home runs and got an impressive performance from starting pitcher Andrew Heaney on the way to an 8-1 victory over the Kansas City Royals on Tuesday night in Anaheim, Calif.

Ohtani’s homer got the Angels started, a two-run blast in the first inning off Royals starter Kris Bubic.

It was Ohtani’s 17th home run of the season, one behind the major league leaders, the Toronto Blue Jays’ Vladimir Guerrero Jr. and the Atlanta Braves’ Ronald Acuna Jr. The homer also was the longest of Ohtani’s career, estimated at 470 feet. His previous long was 451 feet hit on April 4 against the Chicago White Sox.

Ohtani doubled to lead off the third inning and scored on Stassi’s one-out home run for a 4-0 Angels lead. Stassi, hitting in the cleanup spot, also homered in Monday’s game.

Iglesias and Upton each hit a solo homer in the fifth, both off Bubic, for a 6-0 advantage. Bubic (1-1) gave up six runs in four innings, with five of the six hits he yielded going for extra bases. He struck out four and walked two.

Meanwhile, Heaney (4-3) was sharp in the early innings. He allowed only one hit through the first four innings, a third-inning bunt single by Whit Merrifield, then pitched his way out of a jam in the fifth.

The Royals had runners on second and third with two outs, but Heaney struck out Merrifield to escape.

In the seventh, Heaney couldn’t handle Michael A. Taylor’s one-out comebacker, the ball deflecting off his glove and going for an infield single. Taylor then scored on Hanser Alberto’s two-out double.

Heaney gave up six hits and walked two while striking out seven.