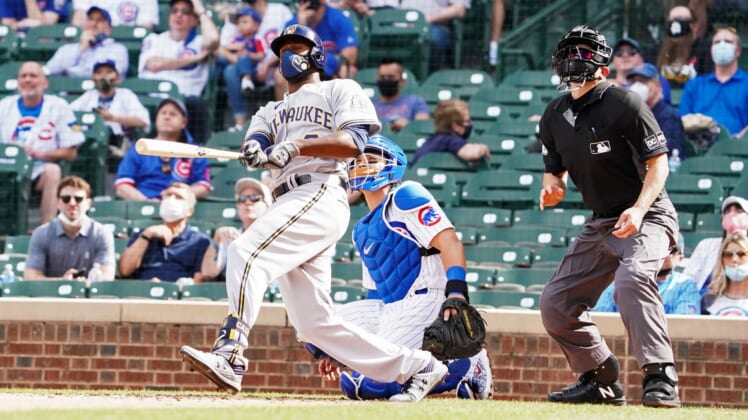 Lorenzo Cain blasted a pair of home runs, including a tiebreaking, three-run shot in the top of the 10th inning, to lead the Milwaukee Brewers to a 4-2 victory over the host Chicago Cubs on Wednesday afternoon.

Cain hit a solo shot in the eighth and followed up with his three-run homer in extra innings to drive in all four runs for Milwaukee. Christian Yelich went 3-for-4 with a double for the Brewers, who won the rubber match in the series finale.

Joc Pederson hit a solo homer and Jason Heyward had an RBI single in the 10th for the Cubs, who managed only three hits as their struggles continued at the plate. Chicago scored two runs on four hits combined over the final two games of the series.

Brewers left-hander Josh Hader (1-0) pitched a scoreless ninth inning to earn the win in relief. Right-hander Brad Boxberger picked up his first save by retiring Ian Happ with the bases loaded in the 10th.

Cubs right-hander Brandon Workman (0-1) took the loss after giving up three runs (two earned) on two hits in one inning.

Brewers right-hander Brandon Woodruff carried a no-hitter into the seventh until Happ singled to right field. Woodruff did not issue a walk, and he threw 51 of 74 pitches for strikes to stymie Cubs hitters despite the wind blowing out to left field.

Cubs right-hander Kyle Hendricks also settled for a no-decision despite limiting the Brewers to one run on four hits in six innings. He walked one and struck out six before giving way to right-handed reliever Alec Mills.

Mills pitched a scoreless seventh inning, but he found trouble on his fifth pitch of the eighth. He left a fastball up and over the plate, and Cain turned on it for a wind-aided homer that sailed out of Wrigley Field and landed onto Waveland Avenue.

The eighth-inning blast was Cain’s first since Sept. 27, 2019. He played only five games in 2020 before opting out for the rest of the season.

The Cubs pulled even in the bottom of the eighth against Brewers reliever Devin Williams.
Pederson’s first hit with the Cubs was memorable, as he hit a towering fly ball an estimated 417 feet into the right-field bleachers.