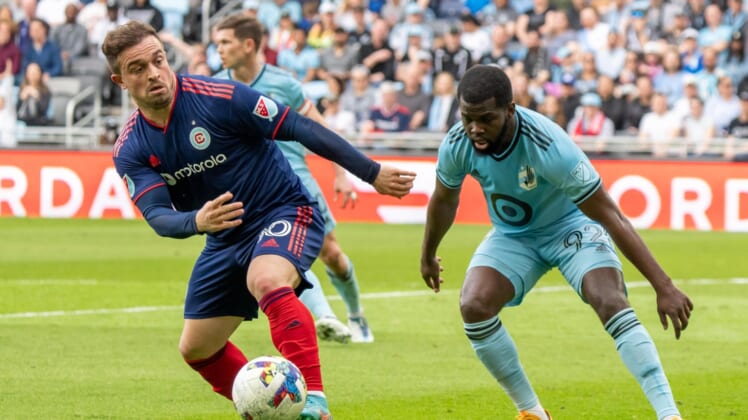 With both sides increasing their scoring opportunities in the second half, Minnesota (4-2-2, 14 points) broke through off a turnover by Chicago’s Wyatt Omsberg. The ball eventually got to United’s Bongokuhle Hlongwane, who patiently crossed to Reynoso for a left-footed conversion through traffic in the 72nd minute.

Four minutes later, Chicago (2-2-4, 10 points) went down a man after Federico Navarro drew a red card for his second yellow of the match.

Then Arriaga’s header from a Reynoso corner in the 84th essentially iced the contest.

Lod, off a second assist from Hlongwane, added some 88th-minute insurance to send MUFC to its third straight victory over a week’s span — including U.S. Open Cup play — after losing back-to-back MLS contests.

Chicago entered the match conceding a league-low two goals but broke down in the second half. The Fire, meanwhile, have scored just five goals in 2022, and none during their current 0-2-2 stretch.

Following a rather pedestrian first half, both sides picked up the pace in the second half.

Chicago delivered its best chances through the first 15 minutes of the second, then it was Minnesota who picked up its game through a series of set pieces from the corner. The home side was finally rewarded in the open through Reynoso.

Minnesota was the aggressor early, but homegrown Chicago goalkeeper Gaga Slonina, who turns 18 in May, appeared to get a hand on the ball before it hit the crossbar within the first half-hour.

The Fire also had their moments of pursuit in the first half, but never seriously threatened. MUFC keeper Dayne St. Clair’s lone save of the first half came rather easily off a Chicago free kick.

However, when the second half rolled around, St. Clair (four saves) had to exert himself to bat away a drive from the Fire’s Stanislav Ivanov just before the hour mark. He then made a diving stop on Kacper Przybylko in the 65th.