Looking to soar after big offseason, the San Diego Padres open vs. Diamondbacks 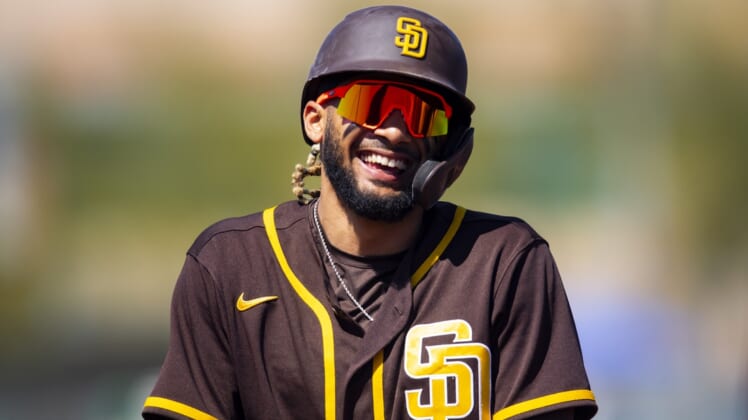 The San Diego Padres are looking to surprise the reigning World Series champion Los Angeles Dodgers in the National League West this season.

The Arizona Diamondbacks are just hoping to surprise anybody.

With that as a backdrop, the division-rival Padres and Diamondbacks open the season Thursday afternoon at Petco Park in San Diego with offseason acquisition Yu Darvish starting for the hosts against Arizona’s Madison Bumgarner.

Many view the Padres as the third-best team in the Major Leagues after a winter that saw general manager A.J. Preller acquire Cy Young Award candidates Darvish and Blake Snell in trades that capped a year of dealing prospects from one of the game’s top farm systems for proven major leaguers.

Then the topper came as spring training opened, when the Padres signed 22-year-old shortstop Fernando Tatis Jr. to a $340-million deal that spans a major-league record 14 seasons.

“If things go well, I don’t expect they will be out a long time,” Padres manager Jayce Tingler said of Nola, Grisham, Adams, Johnson and Altavilla. “There’s the health component and they lost game action and the rhythm and timing of the game. We feel really good where guys are at with the health component. It’s just a matter of getting some game reps, repeating it and going back-to-back.”

Lamet, regarded as the No. 2 or 3 starter, won’t likely join the rotation until late April, while Stahm continues to rehab from offseason knee surgery.

The Padres finished the pandemic-shortened 2020 season with a 37-23 record and the highest winning percentage in franchise history (.617) before being swept by the Dodgers in the second round of the playoffs.

Third baseman Manny Machado and Tatis finished third and fourth in the National League Most Valuable Player voting, respectively. Machado, Tatis and Wil Myers combined for 48 homers and 132 RBIs in 2020.

Arizona, meantime, finished last in the division at 25-35 in 2020. But Arizona manager Torey Lovullo greeted his players with “are you ready to surprise people?” at the start of spring training. His idea is that his players, including Bumgarner, will rebound from subpar performances during the strange 2020 campaign.

The Diamondbacks will also be missing a key piece. Zac Gallen, who finished ninth in the National League Cy Young Award voting last season and figured to be the Opening Day starter, will miss at least the first month of the season due to a hairline stress fracture in his right forearm.

Bumgarner was 1-4 with a 6.48 ERA in nine starts last season in the first year of a five-year, $85-million contract with the Diamondbacks. He also started last season’s opener against the Padres at Petco Park, allowing three runs on four hits and three walks in 5 2/3 innings of a 7-2 Padres win.

“Obviously, starting on Opening Day is a well-deserved honor that he’s done many, many times,” Lovullo said.

Of course, Bumgarner is also known for his Opening Day hitting prowess, considering he hit two home runs on Opening Day in 2017.

Darvish finished second in the National League Cy Young Award race last year, going 8-3 with the Cubs with a 2.01 ERA in 12 starts. He is 3-1 lifetime against Arizona in five starts with a 2.93 ERA and 53 strikeouts in 30 2/3 innings.