Looking ahead: Five teams that pose a threat to the Yankees 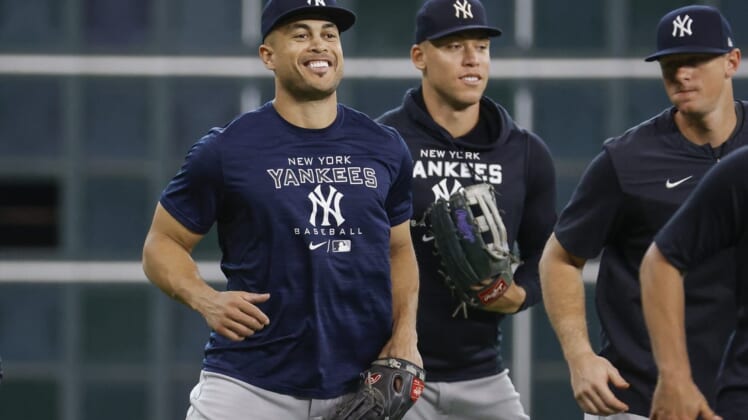 LOS ANGELES — The New York Yankees and Houston Astros had a common goal this week, although it evaporated instantly with the end of the All-Star break.

The Yankees stood head and shoulders above the rest of baseball in the first half, but as the season winds down over the next 2 1/2 months, New York and Houston will battle it out for American League supremacy. It starts Thursday when they meet for a doubleheader at Houston.

There was less animosity Tuesday when an AL team managed by the Astros’ Dusty Baker, defeated the National League 3-2, largely due to a two-run home run from the Yankees’ Giancarlo Stanton. Once the final out was recorded, it was back to business.

“The way (Stanton) is looking and the way he’s built, he should be around for an awful long time,” Baker said Tuesday from Los Angeles. “I just regret that we have to play him in a doubleheader on Thursday.”

The Yankees were a pitching and hitting juggernaut in the pre-All-Star Game portion of the schedule. On offense, their 157 home runs were 10 more than the next closest team, and they also had a baseball-best .776 OPS. Nobody came near their 497 runs scored.

From the mound, the Yankees had the third-best ERA in baseball at 3.08 and were second in the AL with 846 strikeouts. Yankees starting pitchers led the AL with 519 strikeouts, and the 1.04 WHIP from the rotation was best of any team in the game.

But New York did stumble into the break, looking less like the monster that stormed through the July 4 holiday. They went just 6-5 before baseball’s mid-July pause, losing a series to the Cincinnati Reds, while going 4-3 against the rival Boston Red Sox, although they did head into All-Star festivities by defeating the Red Sox by a combined 27-3 score over the final two games.

Here are five teams that can challenge the Yankees’ first-half domination:

George Springer and Carlos Correa are gone, but the Astros are still thriving with the same combination of relentless offense and strong starting pitching. Yordan Alvarez and Kyle Tucker have emerged as offensive leaders, while Jose Altuve continues to produce. Framber Valdez and Justin Verlander provide the 1-2 punch for the starting staff, which leads the AL with a 3.15 ERA. Houston certainly is in line for a No. 1 or 2 seed in the playoffs and an opening-round bye as it looks to advance to a fourth World Series in the past six seasons.

The World Series champions weren’t even in first place in their own division at the All-Star break, which is hardly cause for concern. They were five games behind the New York Mets at the end of July last season then roared to a championship. A life without Freddie Freeman was made easier by Matt Olson’s arrival and Ronald Acuna Jr.’s return. Left-hander Max Fried continues to establish himself as an elite pitcher in the game, while right-hander Kyle Wright has parlayed his World Series success into a strong 2022 season to finally become a rotation mainstay.

The bullpen is banged up and the offense is prone to fits and starts, yet the Dodgers still found themselves as the NL’s top team at the All-Star break, 3 1/2 games better than the Mets and 10 games clear of anybody in their own division. Mookie Betts emerged from a slow start to become an All-Star and Trea Turner has been as steady as anybody in baseball. Freeman has been solid following his emotional departure from Atlanta, and catcher Will Smith is a stud. Ace Walker Buehler is out indefinitely, yet the rotation still has a baseball-best 2.77 ERA from its starters. If Max Muncy and Justin Turner produce to expected levels in the second half, while Buehler returns, this becomes the team to beat. Or will issues at closer drag down the team?

The Astros and Yankees have the top two rotations in the AL, but the Rays are right on their heels with a 3.35 ERA, and an overall mark of 3.37 that is fourth best in baseball. Pitching always has been where the Rays have thrived, with second-year starter and All-Star Shane McClanahan leading the way with a 1.71 ERA, the the best of any qualified starter in baseball. The team OPS of .691 is just 19th best in baseball, with teams like the Cubs and Rangers better. Well-pitched games are the hallmark of the playoffs, which gives the Rays a chance at a World Series run. But Rays pitchers are going to need run support at some point to limit the number of stressful innings.

Nobody in the AL has delivered a winning streak longer than the Mariners’ current 14-game run, which left Seattle fans yearning for more baseball during the break. Excitement for the Mariners only grew during the Home Run Derby when Julio Rodriguez put on a show with 81 total home runs in the competition, only to finish second. First baseman Ty France was an All-Star, while the pitching staff has led the way with a 3.53 ERA, fifth best in baseball. Right-hander Logan Gilbert (10-3, 2.76 ERA) is a major part of the Seattle youth movement. It is something of a full-circle season for the Mariners, who haven’t been to the playoffs in 21 years and are being led by a 21-year-old rookie in Rodriguez. Their post-break test comes early with a series against the Astros.