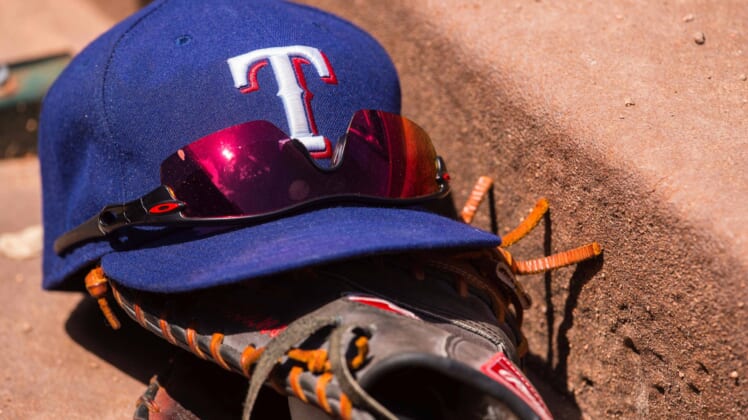 Jun 13, 2015; Arlington, TX, USA; A view a Texas Rangers baseball hat and glove during the game between the Texas Rangers and the Minnesota Twins at Globe Life Park in Arlington. The Rangers defeated the Twins 11-7. Mandatory Credit: Jerome Miron-USA TODAY Sports

The Texas Rangers will host the Kansas City Royals Thursday evening at Arlington. It’s their first home game since the untimely passing of longtime beat writer and Dallas Morning News writer Gerry Fraley at the age of 64 this past weekend.

As such, the Rangers felt it incumbent upon themselves to pay tribute to a man that has covered organization since all the way back in 1989.

It’s great to see the Rangers pay homage to this genuine man in the press box Thursday evening.

After battling cancer with a strength that defined his life, Fraley passed away on Saturday. His death touched pretty much everyone within the Metroplex.

That includes former Rangers part owner and the 43rd President of the United States, G.W. Bush, who described the longtime scribe as a “an accomplished writer and a keen observer,” via USA Today.