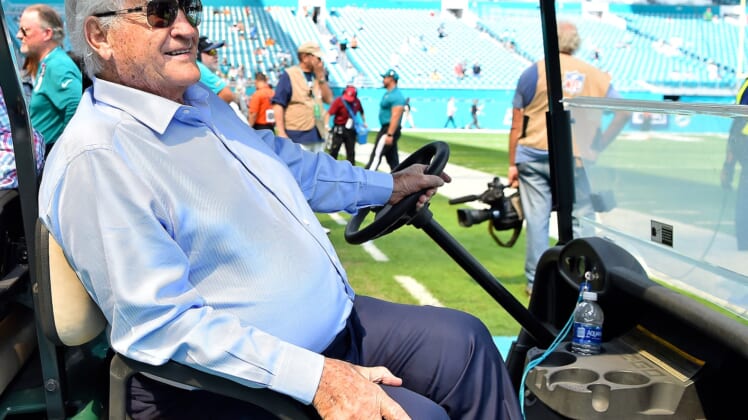 The Miami Dolphins and the NFL family lost an all-time great this offseason when legendary coach Don Shula passed away. With the 2020 NFL season approaching, the Dolphins have unveiled a touching way to honor the iconic coach.

Shula, who died at the age of 90 on May 4, is recognized as one of the best NFL head coaches of all-time. His impact on the field and with his players made him a beloved figure and the Dolphins will pay tribute to that legacy this season.

Shula’s path to football started on the field as a defensive back for the Cleveland Browns, playing with the team for two seasons. He would later play for the Baltimore Colts (1953-’56), followed by a final season with the Washington Football Team (1957).

While the Hall of Famer’s playing career was short, he quickly found a home in coaching. His knowledge of the game, how to mentor young players and get the best out of them helped him blossom into an incredible head coach.

The Dolphins’ decision to hire Don Shula in 1970 would go down as one of the greatest moves in history, sparking one of the NFL’s greatest dynasties.

It’s only fitting that the patch this season will honor Shula’s incredible reputation for winning. The head coach of the only undefeated team in NFL history, it is the perfect way to capture Shula’s legacy.

The moment Shula became a head coach in 1963 with the Baltimore Colts is when his reputation for winning began. Baltimore went 8-6 in its first season under Shula then won 12 games the following season.

Across seven seasons with the Colts, Shula’s club posted a 71-23-4 record and won an NFL championship in 1968. Following an incredible stint in Baltimore, Shula headed to Miami where the course of NFL history changed forever.

The Dolphins won just 12 total games in the previous three seasons before Shula’s arrival. He instantly turned the team around with a 10-4 record in his first year and a trip to the playoffs.

Miami would respond the following season by making it to Super Bowl VI, ultimately losing to the Dallas Cowboys and legendary coach Tom Landry.

Shula learned from the Super Bowl loss and the 1972 Dolphins bounced back in historic fashion with an undefeated season, capped off with a 14-7 victory over Washington in Super Bowl VII.

The Dolphins would repeat as Super Bowl Champions in 1973. While it would be their last title, playoff appearances became the standard in Miami for years to come.

Shula finished his career with a 347-173-6 record, while also being named to the NFL’s 100th Anniversary All-Time Team and was later inducted into the Dolphins’ Honor Roll.

He will be forever missed by the NFL world, but it’s wonderful to see the Dolphins found the right way to honor his legacy.