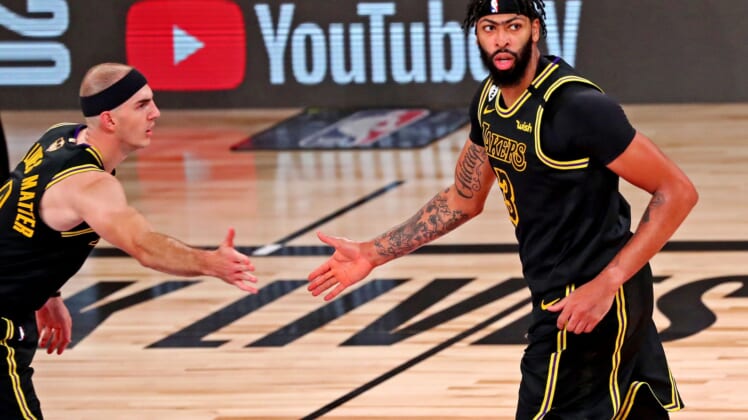 The Los Angeles Lakers are looking to take a stranglehold on the 2020 NBA Finals in Game 3 against the Miami Heat Sunday evening. Anthony Davis and Co. have won the first two games of the lopsided matchup by a combined 28 points. In reality, it really has not been that close.

As the Lakers look to earn their first title in a decade, Davis himself was seen heading to the arena at Walt Disney World in Orlando making a major statement. Check out the likely NBA Finals MVP sporting a black Colin Kaepernick San Francisco 49ers jersey.

It’s by now well known where most of the big stars in the NBA world stand on this. Once the season resumed in Orlando during the summer, national anthem protests were the name of the game. In fact, the Association boycotted early playoff games following the shooting of Jacob Blake in Kenosha, Wisconsin.

For his part, AD has not been among the most outspoken. He’s letting the jersey of choice do the talking for him.

Speaking of talking, Davis heads into Game 3 averaging 33.0 points and 11.5 rebounds per game thus far in the NBA Finals.