LOOK: Kevin Durant once again gets into it with the media 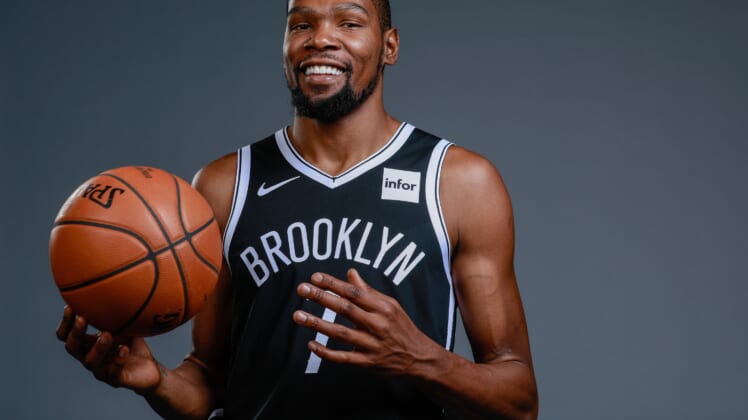 Brooklyn Nets star forward Kevin Durant might have been bored during quarantine Friday afternoon. How do we know? He decided to use his time to once again go after others on social media.

It all started when a Matt Moore from Action Network likened Giannis Antetokounmpo’s pending free-agent decision to when Durant now-infamously left the Oklahoma City Thunder for the Golden State Warriors in free agency years ago.

The two-time NBA Finals MVP was not even remotely done at that point.

Durant next went after Drew Shiller of NBC Sports Bay Area, the host of “Warriors Outsider.” It was something else.

Durant has made his feelings known about the Bay Area media since he left Golden State for the Nets in free agency prior to the start of the 2019-20 season. In fact, Durant’s departure from the Warriors included him leaving certain teammates on rocky terms.

It’s also not a secret that Durant has had his run-ins with both the media and perceived trolls on social media. He apparently doesn’t know when enough is enough.

That was the case Friday afternoon.

It all stems from Antetokounmpo being linked the Durant’s former Warriors team on a never-ending loop in recent months.

Golden State has been planning for years to target the Greek Freak once he enters free agency following the 2020-21 season.

Even more directly, it’s all about the backlash Durant received for leaving Oklahoma City for a Warriors team that won 73 games and defeated the Thunder in the Western Conference Finals months before he signed on in Northern California.

Some people simply need to learn when not to hit tweet. Being in the public eye, that’s magnified more for KD.