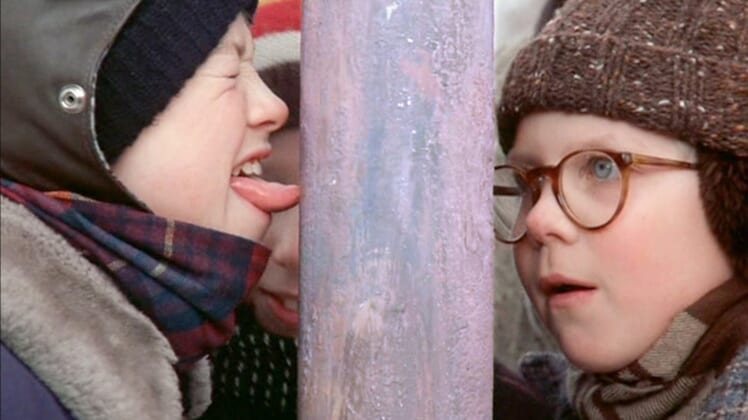 With temperatures throughout the Midwest reaching unbearable lows, the Cleveland Indians are channeling the classic movie, “A Christmas Story.”

With temperatures in Cleveland hovering right around zero and a -28 degree wind chill, the Indians released a tweet saying that if it got 1 million retweets, they’d lick a foul pole at Progressive Field.

No, we're not warm yet.
Yes, we will do it. pic.twitter.com/aiykd0UpQV

Cleveland’s other two teams, the Cavaliers and Browns, both got in on the fun. The Cavs, in particular, got into the spirit of “A Christmas Story.”

The Philadelphia Phillies and Chicago White Sox were two of the MLB teams to respond to the Indians.

It's not worth it! Trust us… pic.twitter.com/4qKQmloeSS

Is it cold out? Hadn't noticed… pic.twitter.com/2pCXQdIRQ0

Cleveland Water also chimed in with a tweet that will be helpful if one million retweets are reached.

In case this works out (?) for you, a warm cup of tap water will unstick a tongue from a pole

At the time of this writing, the original tweet had just over 29,000 retweets. So, it seems that the Indians are safe.

And for the sake of whoever would have to honor this bet, we hope it stays that way.