It was pretty much a given. Considering what we’ve seen in Philadelphia in recent years, Sunday’s NFC Championsip Game between the Eagles and Minnesota Vikings wasn’t going to conclude without something going wrong.

Heck, the Philadelphia Police Department sent out this ominous warning to companies near the site of the championship game earlier in the week (more on that here).

But the issues started even before kickoff on Sunday. Riot police on horseback were called to the scene at Lincoln Financial Field to break up an increasingly unruly tailgate. In fact, a fight apparently broke out between Eagles fans and authorities.

To say it’s not good would be an understatement.

“A massive fight that left at least one fan bloodied and created chaos in the parking lots of Lincoln Financial Field broke out on Sunday just hours before kickoff between the Eagles and Minnesota Vikings,” NJ.com reported.

Here, we see a bloodied fan cuffed by state troopers. 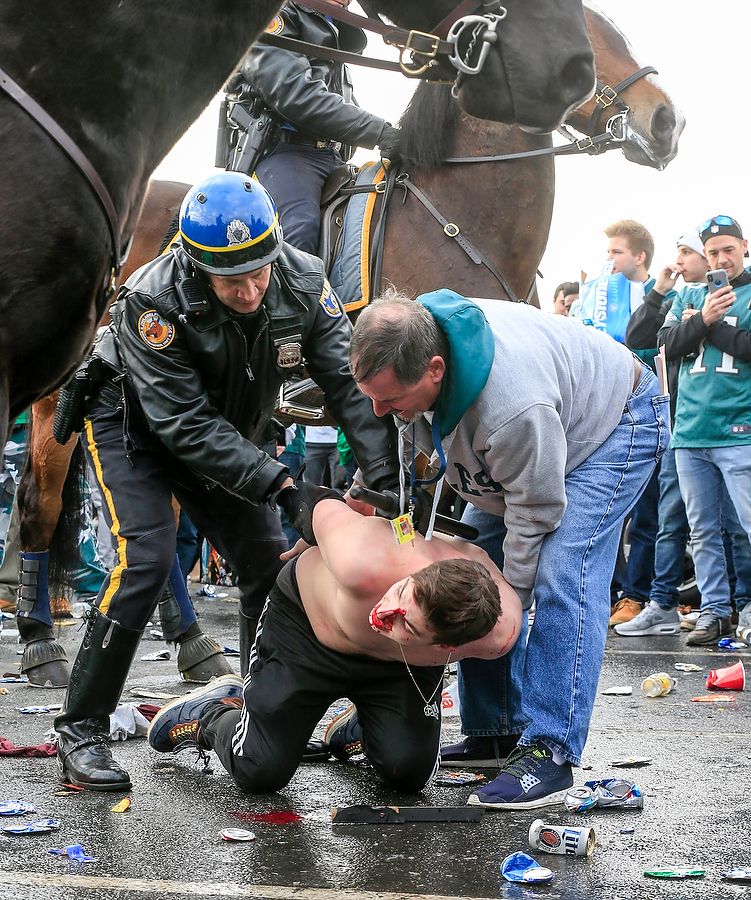 We also see Vikings fans taunting supporters of the home team. That’s likely one of the primary things that led to violence on the parking lot.

Though, the report does go on to note that the fight took place between police officers and Eagles fans. Those supporting the purple apparently were not involved.

“The fight was between Eagles’ fans and the police officers, and it doesn’t appear any Vikings’ fans were involved,” the report read. “The incident, which required Philadelphia police officers and Pennsylvania State troopers to get under control, left at least one fan beaten and blooded.”

This all comes on the heels of an Eagles fan being arrested for assaulting a police horse. Needless to say, things likely won’t get any safer once the game comes to a culmination Sunday evening.