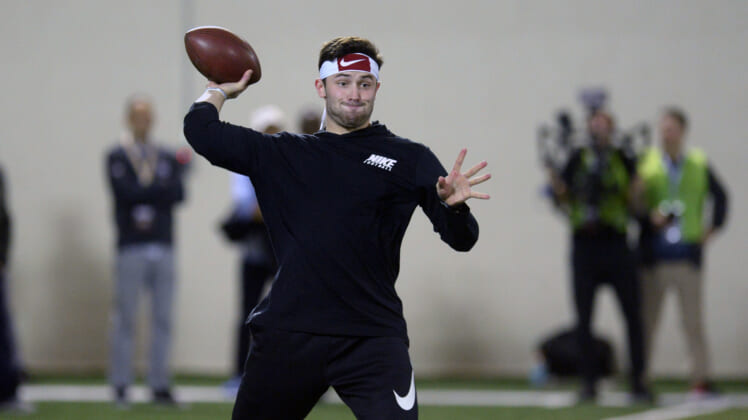 As if Baker Mayfield didn’t feel disrespected enough. This time it isn’t the Cleveland Browns, it’s the Oklahoma Sooners, or at least whoever was in charge of crafting his Heisman statue which will eventually go outside of Gaylord Family-Oklahoma Memorial Stadium.

The statue was originally supposed to be showcased in 2020, but COVID complications slowed the process down. Don’t fret, we have a picture of the statue from the Friday reveal at the Everest Training Center, which included a large group of OU alumni, including Mayfield himself of course.

I must warn you, it’s an ugly sight.

Is it just me or does Mayfield not look happy to see his statue? Shouldn’t this be a great moment? Well, you see it right? I don’t blame the dude.

Also, I have several questions. Where is his helmet? Who is the statue depicting? Initially, when seeing this, there was no thought of Mayfield that came to mind, my first instinct was that it was a former Sooner great, but wow.

To be fair, I imagine it’s an incredibly difficult task to mold a statue that offers even a remote amount of actual resemblance to a human being’s face, but this one didn’t hit the mark. Not saying I could do better, believe me, this is incredible in those aspects, but let’s be honest, that statue Oklahoma will be placing outside their football stadium? Well, it’s not of Baker Mayfield.