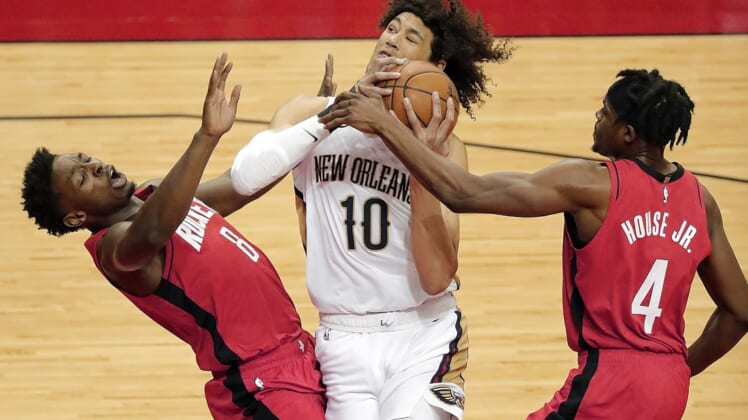 Lonzo Ball made a career-high eight 3-pointers to pace a balanced scoring attack as the New Orleans Pelicans fended off the host Houston Rockets 122-115 on Sunday.

Ball, who missed the previous seven games with a hip injury, paired 27 points with nine assists to lead the Pelicans — who were without forwards Zion Williamson and Brandon Ingram. Five of his teammates also scored in double figures.

After Houston matched its largest lead of the game at 102-97 following a series of dazzling dunks from rookie Kenyon Martin Jr., the Pelicans responded with a 10-2 run to reclaim the lead.

Down the stretch, multiple hands played a role in keeping the Rockets at bay, with Wes Iwundu and Naji Marshall drilling timely 3-pointers while Willy Hernangomez converted in the paint.

Hernangomez had 15 points and 12 rebounds off the bench. Eric Bledsoe scored 19 points, James Johnson 18, and Stephen Adams and Marshall scored 12 apiece for the Pelicans.

Sterling Brown and Kevin Porter Jr. scored 12 apiece for Houston, but Porter, whose buzzer-beating 3-pointer to close the half ignited a third-quarter surge, recorded eight turnovers and missed 10 of 15 shot attempts.

Houston trailed 70-56 before the Porter half-court heave, but turned a late 9-0 run in the third into its first advantage since early in the game. D.J. Wilson and D.J. Augustin hit 3-pointers for a 92-89 lead.

New Orleans used a 22-5 run to build an early lead, with Ball drilling all four of his 3-point attempts in the first quarter during that stretch. The Pelicans turned seven Houston turnovers into 15 points in the quarter, and the Rockets trailed 38-27 entering the second period.

The Pelicans continued to capitalize on Houston miscues and closed the half with 18 points off 11 Rockets turnovers. Olynyk kept the Rockets in contention with 19 points in 18 minutes off the bench in the half.