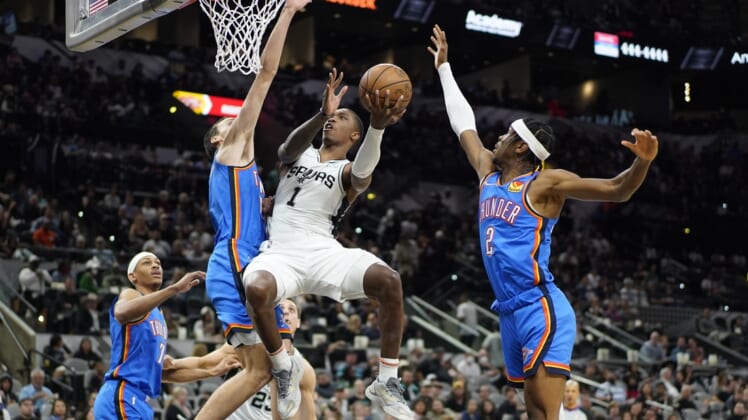 Lonnie Walker IV sank the deciding 3-pointer with 1.8 seconds to play, lifting the host San Antonio Spurs to a 122-120 victory over the skidding Oklahoma City Thunder on Wednesday.

The Spurs led by 12 at halftime, by 16 in the third quarter and by seven entering the fourth, but Oklahoma City rallied. The Thunder tied the game at 117 on three free throws by Aleksej Pokusevski with 2:19 to play. The teams then traded the lead before Pokusevski leaked out for layup to put the Thunder on top at 120-119 with 4.8 seconds left.

Walker then canned the game-winner, the Spurs’ season-high 19th 3-pointer of the contest, giving San Antonio just its third victory in 10 games.

Shai Gilgeous-Alexander led all scorers with 34 points and added eight assists for the Thunder, who have dropped seven straight games. Darius Bazley had 25 points and nine rebounds, Pokusevski hit for 16 points and Isaiah Roby scored 10.

The Spurs shot 59.1 percent in the first quarter while getting points from eight players on the way to a 37-29 advantage.

Oklahoma City fought back to tie the game at 51 on a free throw by Gilgeous-Alexander with 3:59 to play in the second quarter.

San Antonio answered with back-to-back 3-pointers from Zach Collins and Walker, and after a free throw by Pokusevski, another trey from Walker gave the Spurs an eight-point lead. The hosts led 68-56 at the break.

Bazley led the Thunder with 12 points while Gilgeous-Alexander added 11 in the half.

The Spurs announced prior to the game that forward Doug McDermott, who started 51 games this season, will be lost for the rest of the campaign due to a Grade 3 right ankle sprain.