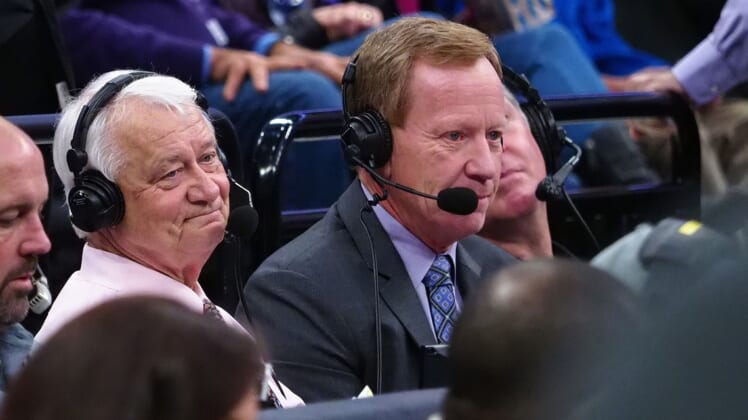 Grant Napear has been doing play-by-play announcing of Sacramento Kings games since 1988. On Tuesday, he resigned following an “All Lives Matter” tweet.

In response, Napear wrote back, “Hey!!!! How are you? Thought you forgot about me. Haven’t heard from you in years. ALL LIVES MATTER…EVERY SINGLE ONE!!!”

That tweet proved to be the beginning of the end for Napear’s career as the play-by-play broadcaster for the Kings.

Napear resigns from the Kings for ‘All Lives Matter’ tweet

Jason Jones of The Athletic shared a short statement from the Kings: “Grant Napear has resigned from the Sacramento Kings. We thank him for his contributions to the team and wish him all the best.”

Napear had previously been placed on administrative leave by KHTK.

The Kings had also stated Monday that “Grant’s recent Twitter comments do not reflect our organization’s views and values,” per James Ham of NBC Sports Bay Area.

To his credit, Napear has expressed remorse for his tweet.

“I’m not as educated on BLM as I thought I was,” Napear said, speaking with Marcos Breton of the Sacramento Bee. “I had no idea that when I said ‘All Lives Matter’ that it was counter to what BLM was trying to get across.”

Napear has also been let go by Sports 1140 KHTK.

The statement in particular highlights the “timing” of Napear’s tweet being “particularly insensitive.”