10 longest droughts without a win in the NFL Playoffs 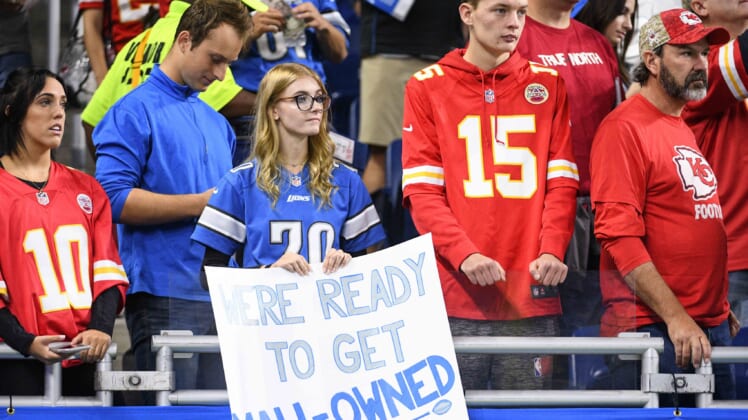 NFL Wild Card Weekend is in the books and the biggest takeaway from the weekend was teams snapping years-long droughts without a playoff win.

The weekend started with the Buffalo Bills winning 27-24 against the Indianapolis Colts, snapping a 26-year drought without a win in the NFL Playoffs. Then it was the Tampa Bay Buccaneers beating the Washington Football Team 31-23, winning their first playoff game since their Super Bowl season back in 2002.

On Day two of Wild Card Weekend, the Baltimore Ravens started the day defeating the Tennessee Titans, winning their first playoff game since winning their second Super Bowl back in 2012. Finally, the opening weekend of the NFL Playoffs culminated in the Cleveland Browns pulling off the biggest upset of the playoffs with a 48-37 win over the Pittsburgh Steelers. This represented Cleveland’s first win in the NFL Playoffs in over a quarter century.

Here, we will take a look at the teams with the longest playoff win droughts that remain intact.

Related: NFL Playoffs, schedule and prediction for divisional round

Denver Broncos: Five-year drought without a win in the NFL Playoffs

The Denver Broncos have not only not failed to win a playoff game since taking Super Bowl 50, they have not even made the playoffs. The Broncos have struggled finding their next franchise quarterback, starting 10 different players at quarterback since their Super Bowl season (including running back Philip Lindsay who started as an emergency QB this season due to COVID).

Carolina Panthers: Five-year drought without a win in the NFL Playoffs

The Carolina Panthers, the team the Denver Broncos beat in Super Bowl 50, have also not won a playoff game since playing in the Super Bowl. The difference is the Panthers have actually made the playoffs once since. They were unsuccessful in a Wild Card matchup against the New Orleans Saints, losing 31-26 in 2018.

The New York Giants continue the trend of teams whose last playoff win came in their Super Bowl season. The Giants have not won a playoff game since beating the New England Patriots, 21-17, in Super XLVI. Their last playoff appearance came in 2017 when they lost to the Green Bay Packers by the score of 38-13 in the wildcard round.

Chicago Bears: 10 years without winning in the NFL Playoffs

The Bears had a chance to end their playoff win drought against the New Orleans Saints this past weekend, but were unsuccessful in a 21-9 loss. The Bears have not won a playoff game since beating the Seattle Seahawks 35-24 in the Divisional Round of the 2010 playoffs. Their last postseason appearance came in 2019 when they lost 16-15 to the Eagles in the wildcard round. The game was notable for Bears’ kicker Cody Parkey missing a potential game winning 43-yard field goal.

The last time the New York Jets won in the NFL Playoffs was back in 2011. The Jets went in to Gillette Stadium and walked away with a 28-21 upset win over the New England Patriots in the divisional round. It has been a rough go for the Jets since their last playoff win, failing to finish with a winning record seven times and have finished last in their division six times.

Five-biggest droughts without a win in the NFL Playoffs

The Washington Football Team also had a chance to end their playoff win drought Saturday, but lost to the Tampa Bay Buccaneers who ended a drought of their own. Their last playoff win came in 2006 when they defeated the aforementioned Tampa Bay Buccaneers 17-10 in the wildcard round. Washington has made the NFL Playoffs three times since with their most-recent appearance prior to this season coming in 2016 losing 35-18 to the Green Bay Packers in the wildcard round.

In 2003, the Las Vegas Raiders (then Oakland Raiders) beat the Tennessee Titans 41-24 in the AFC Championship Game to advance to Super Bowl XXXVII. They ended up losing to the Tampa Bay Buccaneers 48-21. Since then, they have not only failed to win a playoff game, but they have only made the playoffs once. In 2018, the Raiders lost 27-14 to the Houston Texans in the wildcard round. That is the only season they have finished with a record winning since their Super Bowl appearance.

The Miami Dolphins have not won a playoff game since the turn of the century. In 2000, the Miami Dolphins beat the Indianapolis Colts 23-17 in the wildcard round of the NFL Playoffs, punctuated by a 17-yard game winning touchdown run in overtime by Lamar Smith. Since then, the Dolphins have made the playoffs just twice with their most-recent appearance coming in 2017. They ended up losing 30-12 to the Pittsburgh Steelers in the wildcard round.

The last time the Detroit Lions won a playoff game, Barry Sanders was in his third season in the NFL. In 1992, the Detroit Lions beat the Dallas Cowboys 38-6 in the divisional round. This game was notable for being the Cowboys’ first playoff appearance with Troy Aikman, Emmitt Smith and Michael Irvin. Since then, the Lions have made the playoffs eight times with their most recent coming in 2017 when they lost 26-6 to the Seattle Seahawks in the wildcard round.

The Cincinnati Bengals have the longest active playoff win drought, having not won a game since 1991. Their last win in the playoffs came in a 41-14 win against the Houston Oilers in the wildcard round. This was followed by a 14-year drought without a playoff appearance. From the 2005 to 2015 season, the Bengals made the playoffs seven times including a stretch of five straight playoff appearances. Their last time in the playoffs was in 2016 when they lost 18-16 to the Pittsburgh Steelers in the wildcard round. This game was notable for ending with Vontaze Burfict knocking out Antonio Brown with a brutal hit to the head.