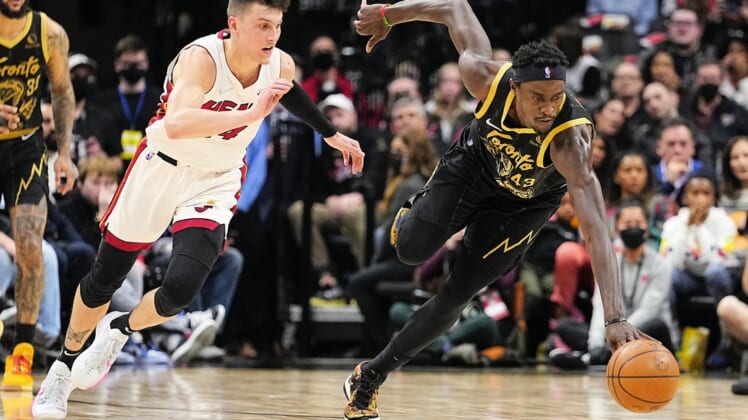 Kyle Lowry had 16 points and 10 assists in his return to Toronto and the visiting Miami Heat defeated the Toronto Raptors 114-109 Sunday night.

Max Strus scored all of his 23 points in the second half for the Heat (51-28), who have won four straight.

A video tribute and long ovation greeted Lowry, nine-year Raptor, who returned to play in Toronto for the first time since joining the Heat in the offseason.

Fred VanVleet scored 29 points and set a team record for 3-pointers in a season for the Raptors (45-33), who had a five-game winning streak end.

VanVleet’s third 3-pointer in the first quarter gave him the team record of 239 for a season, surpassing Kyle Lowry’s 238 set in 2017-18. VanVleet finished with four 3-pointers.

The Heat, who trailed by as many as 13 points in the first quarter, took a one-point lead into the fourth.

Lowry’s 3-pointer gave Miami a two-point lead with 6:08 to play. Strus’s 3-pointer bumped the margin to five. Strus made a 3-pointer and Miami led by seven with 2:57 left. The lead reached 10 on Oladipo’s 3-pointer.

Siakam’s jumper and free throw cut the lead to six with 1:42 left, but Herro came back with a jumper. Chris Boucher’s dunk cut the lead to four with 15.2 seconds left. Herro made one of two free throws to close out the scoring.

VanVleet had 17 points in the first quarter and Toronto led 34-28.

Lowry’s steal and layup cut the lead to five with 10:35 to play in the third quarter. Lowry set up Strus for a 3-pointer with 2:40 to play and Miami led by one. Miami led 79-78 after three quarters.

OG Anunoby (quadriceps) was out for Toronto.