Logano holds off Harvick to win in Kansas 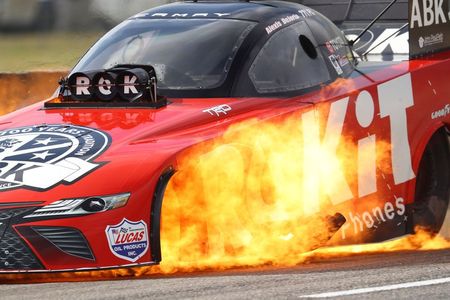 Joey Logano got off to a hot start to the 2020 season by winning two of the first four races. Then the NASCAR Cup Series schedule was interrupted by the COVID-19 pandemic and the Team Penske driver went winless — until Sunday.

Logano used a fast pit stop under caution with just under 50 laps to go, held off 2020 nine-race winner Kevin Harvick the rest of the way and went on to win the Hollywood Casino 400 at Kansas Speedway.

The victory sends Logano to the four-driver Championship Round of the Cup playoffs at Phoenix three weeks from now. Logano won in Phoenix in the spring.

“Man, I am exhausted after that,” Logano, the 2018 Cup champion, said. “We are going to Phoenix and racing for a championship again. Heck yeah.”

The victory takes the pressure off for the next two races. He’s in.

“You come into this race knowing that if you can win this thing you have an amazing advantage,” he said. “The same thing happened in 2018 when we raced for the win at Martinsville knowing that we have two races to battle for nothing but the championship. I can’t believe it. Especially the way the beginning of the race was going and running back there not scoring stage points. It was a good strategy by Paul (Wolfe, his crew chief) and good pit stops and now this … Mustang is going to race for a championship at Phoenix.”

“We didn’t have the speed we were hoping for,” Wolfe said. “One thing we did talk about was how good that pit crew is. Those guys put four tires on at the end and got us off pit road first and that was really the key.”

Stewart-Haas Racing’s Harvick finished second on Sunday after leading a race-best 85 laps. The margin of victory for Logano was .312 seconds.

“We needed to get off pit road first,” Harvick said. “It came to controlling that restart. We didn’t get the lead on the restart.

“We had a fast car. We moved all over the racetrack. We weren’t the best behind somebody. But I had a lot of options as they made the car better toward the end of the race. Good run for us. Wish we could have won.”

He also gave a sarcastic nod to Logano.

“I just didn’t have much right-rear grip,” Bowman said. “It’s still a real good day for us.”

The playoffs’ Round of 8 continues next weekend at Texas Motor Speedway. Like Kansas, it’s a 1.5-mile intermediate track.

Other playoffs drivers who had a good day at Kansas were Chase Elliott, who finished in sixth place, and Martin Truex Jr., who was ninth.

Denny Hamlin, seeking his first career championship, had one of the fastest cars on the track and led 58 laps before running into trouble early in the final stage. While running fifth, he scraped the outside wall and had to pit for new tires. He fell off the lead lap.

The Joe Gibbs Racing driver, who has seven wins on the season, got back on the lead lap by way of a wave around, moved forward and finished a respectable 15th.

Having the most trouble among playoffs drivers was Kurt Busch. The Las Vegas native was slapped with a speeding penalty early in the race. He made his way back up to the front but with 70 laps to go, the engine on his Chip Ganassi Racing Chevrolet went up in smoke. He was running seventh at the time.

“I haven’t seen an engine problem in years,” he said. “No fault of anybody at Hendrick engines (which provides CGR with engines). We were running hard here. Running top five. We were right in the mix.”

Clint Bowyer’s Cup Series-long quest to win at his home-state Kansas Speedway will apparently come to an unsuccessful end. Bowyer, a native of Emporia, finished 26th on Sunday. He announced earlier this fall that he will retired after the current season and move to the television booth.