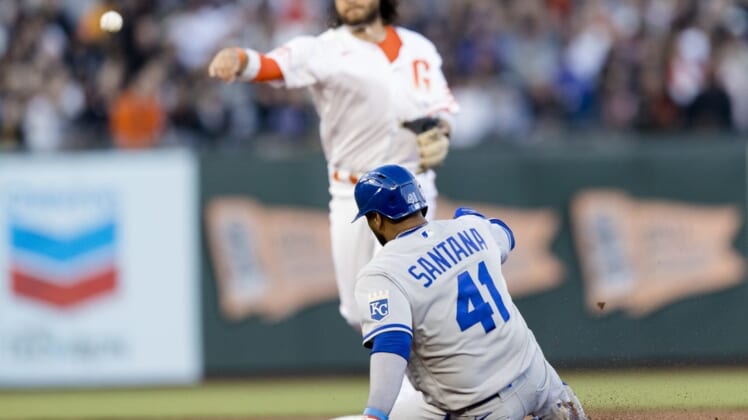 Logan Webb threw seven shutout innings and Tommy La Stella came off the bench to produce half of the Giants’ scoring with a pair of sacrifice flies as San Francisco beat the visiting Kansas City Royals 4-2 on Tuesday.

A pitchers’ duel between Webb and Royals starter Kris Bubic went scoreless into the last of the sixth before the Giants produced a three-run uprising.

Wilmer Flores and Darin Ruf drove in runs with singles, and La Stella, pinch-hitting for Evan Longoria, plated the eventual difference-maker with his first sacrifice fly. The Giants grabbed a lead they never relinquished en route to a second straight over the Royals to start the three-game series and a fifth in a row overall.

Webb (6-2), who had never previously faced the Royals, ran his career interleague record to 3-4. He allowed five hits — all singles — in his seven innings, walking three and striking out nine.

The result ended a five-game winless streak for San Francisco’s Opening Day starter, who had begun the season with five wins in his first seven starts.

Webb left the game with a 3-0 lead, then watched as Kansas City scored twice in the eighth against Giants reliever Tyler Rogers. Bobby Witt Jr. had a sacrifice fly and Salvador Perez hit a two-out RBI single to account for the scoring.

Rogers retired MJ Melendez on a liner to center to end the inning with the potential tying run on base.

Bubic, who was pulled after Ruf’s hit made it 2-0, was charged with three runs on five hits in his 5 1/3 innings. He walked two and struck out six.

The Giants added an insurance run in the eighth when La Stella, who had stayed in the game to DH after his earlier pinch-hitting assignment, lifted his second sacrifice fly following walks by Mike Yastrzemski and Pederson and pinch hitter Brandon Belt’s hit by pitch.

Camilo Doval worked around a leadoff walk in the ninth for his ninth save.

Gonzalez’s double, his 10th of the season, was the game’s only extra-base hit.

Carlos Santana, Michael A. Taylor and Nicky Lopez collected two hits apiece for the Royals, who out-hit the Giants 8-5 but took their fourth straight loss.