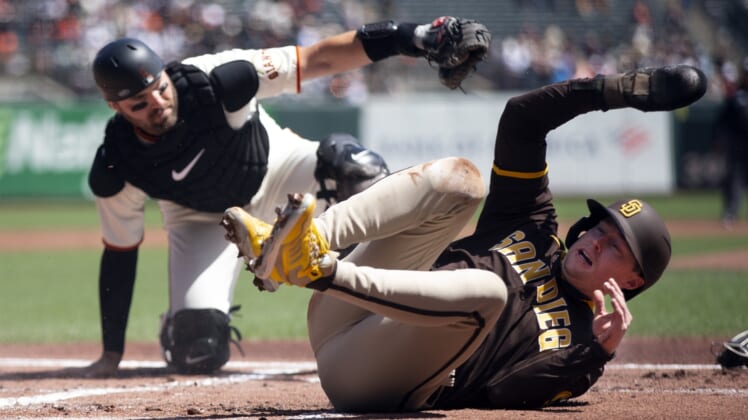 Logan Webb won a pitchers’ duel and Luke Williams drove in the only runs San Francisco would need in the second inning as the Giants edged the visiting San Diego Padres 2-1 in their series finale on Wednesday afternoon.

Webb (1-0) allowed a double and triple among the first three batters he faced, then permitted just two more hits through eight innings in pitching the Giants to a second win in three games against their division rival.

Williams’ two-run double to left field with two outs in the second erased the Giants’ 1-0 deficit. It came after a Heliot Ramos walk and Mauricio Dubon’s single off Padres starter Sean Manaea (1-1).

Manaea settled down quickly and finished six innings having allowed just the two runs and four hits. The left-hander walked two and struck out six.

San Diego’s lone run was the result of a one-out triple by Jake Cronenworth in the top of the first after Manny Machado had doubled. Cronenworth then tried to score on Luke Voit’s grounder to third, but Williams gunned him down at the plate, keeping the game at 1-0.

The only other hits off Webb were a one-out single by Wil Myers in the fifth and a two-out double by Jurickson Profar in the seventh. The right-hander struck out Myers with Profar at second to end the seventh.

Webb, who allowed just one run and five hits over six innings on Opening Day, was even better this time around, giving up just four hits and the one run in his eight innings. He struck out seven and did not walk anyone.

Camilo Doval picked up his first save of the season with a scoreless ninth, surviving a bases-loaded jam created by an infield single by Cronenworth, an eight-pitch walk to Eric Hosmer and hitting Profar with a pitch. But he struck out pinch-hitter Matt Beaty to end it.

Darin Ruf added a second extra-base hit, another double, for the Giants, who went homerless for the fourth time in six games.

With his triple and single, Cronenworth was the only player in the game with multiple hits. The Padres finished with five, one more than the Giants.