Jun 7, 2021; Montreal, Quebec, CAN; Winnipeg Jets defenseman Logan Stanley (64) plays the puck against Montreal Canadiens during the second period in game four of the second round of the 2021 Stanley Cup Playoffs at Bell Centre. Mandatory Credit: Jean-Yves Ahern-USA TODAY Sports

Stanley, 23, made his NHL debut on Jan. 18 and recorded four points (one goal, three assists) in 37 games last season. He also had three points (two goals, one assist) and a team-best plus-6 rating in eight playoff games for the Jets.

Stanley was selected by Winnipeg with the 18th overall pick of the 2016 NHL Draft. 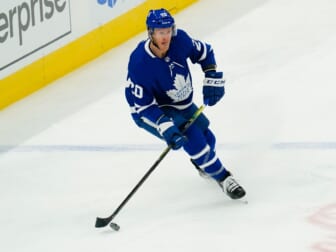