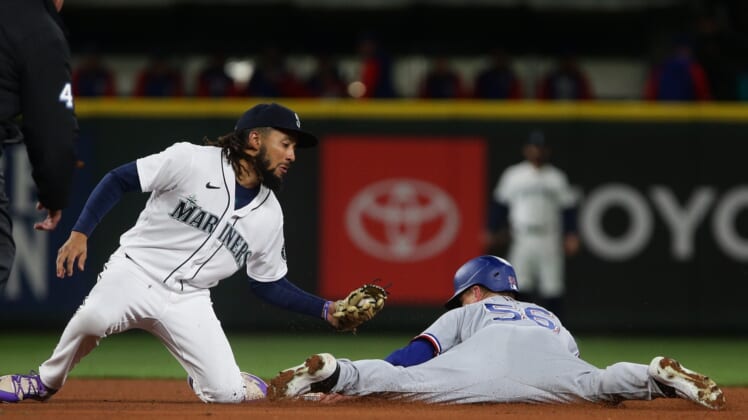 Leadoff hitter Adam Frazier went 3-for-4 with two doubles for the Mariners, who won for the fifth time in their past six games.

Despite turning a first-inning triple play, the Rangers took their fifth consecutive defeat.

The Mariners were without manager Scott Servais, third base coach Manny Acta and reliever Paul Sewald, who all tested positive for COVID-19 earlier in the day. First base coach Kristopher Negron, who managed at Triple-A Tacoma last season, filled in for Servais.

Gilbert (2-0) allowed six hits, didn’t walk a batter and struck out four. The right-hander lowered his ERA to 0.54 over three starts.

Frazier walked to open the first and went to second on Ty France’s single to left field. Jesse Winker lined out to Rangers first baseman Nathaniel Lowe, who stepped on the bag to double up France and lobbed the ball to shortstop Corey Seager covering second to complete the triple play.

Seattle took a 1-0 lead in the third. With one out, Abraham Toro doubled to right. Cal Raleigh hit a hard grounder down the first base line that went off Lowe’s glove for an error, allowing Toro to score.

The Mariners tallied three more times in the fifth.

Frazier led off with a ground-rule double to right-center and France grounded a single to left, scoring Frazier. That ended Dunning’s night, with lefty John King coming on in relief. Winker greeted him with a single to left, and a walk to Eugenio Suarez loaded the bases.

The Rangers scored twice off Diego Castillo in the ninth. Marcus Semien and Seager singled to open the frame. The first run scored on Mitch Garver’s fielder’s-choice grounder and the second on Garcia’s sacrifice fly.

Nick Solak, representing the tying run at the plate, struck out to end the game.