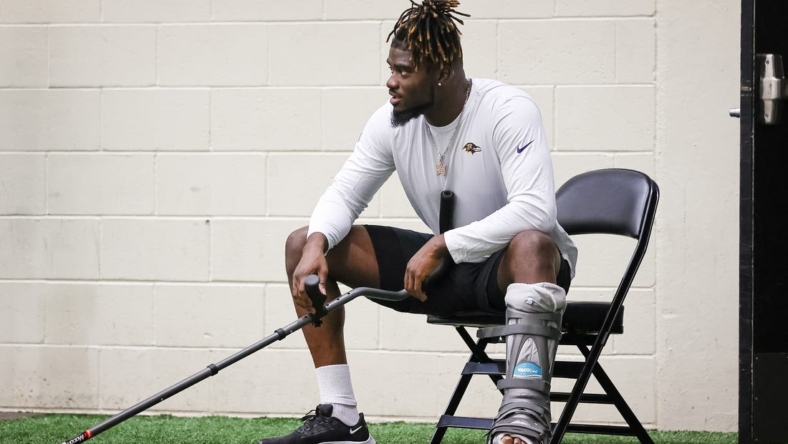 It didn’t take long for the Baltimore Ravens to erase a perceived weakness at linebacker.

One day after officially acquiring inside linebacker Roquan Smith from the Chicago Bears, the Ravens added a pair of their own former second-round picks to the 53-man roster to bolster their outside linebacker corps.

Tyus Bowser, who tore his Achilles in the final game of the 2021 season, returned to practice Oct. 12 and was cleared along with 2021 second-round pick David Ojabo. Ojabo injured his Achilles at his pro day prior to the 2022 draft and is less certain to be in the lineup Monday night when the Ravens face the New Orleans Saints.

“They’ll be activated, so they’ll both be activated and available, and we’ll see what happens,” Ravens coach John Harbaugh said. “I think Tyus will be ready to play, for sure. And really, it kind of comes back to Tyus saying, ‘I’m going.’ He wants to be mentally ready to go, so you can ask him. But I’m kind of counting on him, to be honest with you. He has targeted this game, so we’ll see. And then Ojabo is a little different. We’ll see where he’s at with it, in terms of being ready. He’s a rookie. But he will also be possible, as far as playing in the game Monday night.”

Ojabo was on his way toward being a first-round pick by most accounts after posting 11 sacks for Michigan last season. Instead, he fell to No. 45 due to his March pro day injury.

“We’ve got to get him out there to practice more and see what he looks like,” Harbaugh said. “He hasn’t really been in any team period yet. We’ve got to take a look at the team period, look at how much he knows of the defense.”

Baltimore had 21 days to activate both players, who began participating with the team in individual workouts last month.

Bowser was a second-round pick of the Ravens in 2017. In 80 games (19 starts) with the franchise, he has 139 tackles, 17.5 sacks, 14 passes defensed, four interceptions, three forced fumbles, one fumble recovery and a touchdown. The Ravens also have veterans Justin Houston and Jason Pierre-Paul along with Odafe Oweh, the 31st overall pick in 2021 who has one sack in eight games this season.

Smith is the NFL’s leading tackler and joined the Ravens in a trade with the Bears. He’ll man the middle with former first-rounder Patrick Queen.