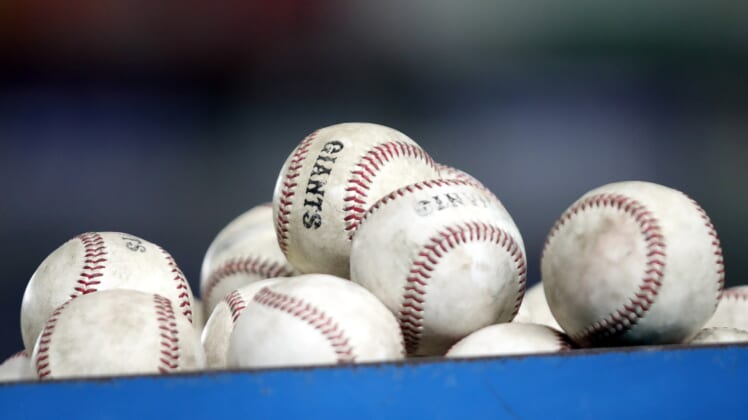 Mar 17, 2019; Tokyo, Japan; Baseballs sit atop a pitching machine as seen before the game between the Seattle Mariners and the Yomiuri Giants at Tokyo Dome. Mandatory Credit: Darren Yamashita-USA TODAY Sports

For the first time in its history, the Little League World Series will not be played in 2020. The solemn announcement came Thursday and included a statement that the event will return next year in Williamsport, Pa.

“This is a heartbreaking decision for everyone at Little League International, but more so for those millions of Little Leaguers who have dreamt of one day playing in one of our seven World Series events,” Little League President and CEO Stephen D. Keener said. “After exhausting all possible options, we came to the conclusion that because of the significant public health uncertainty that will still exist several months from now, and with direction from Pennsylvania Governor Tom Wolf and Secretary of Health Dr. Rachel Levine, as well as senior public health officials and government leaders from locations where our other six World Series are held, as well as the their qualifying regional tournaments, it will not be possible to proceed with our tournaments as we’ve hosted them for nearly 75 years.”

It just was not viable to play the World Series this summer. In addition to the United States currently being the epicenter of the COVID-19 pandemic, international teams traveling from outside the borders just wasn’t an option.

There’s currently a travel restriction on entrance to the United States from Europe and some nations within Asia. We have no idea when said restrictions will be lifted.

As it relates to Williamsport, this has to be a bitter pill to swallow. The annual Little League World Series represents an economic boon for the region.

The 2020 MLB Little League Classic between the Boston Red Sox and Baltimore Orioles scheduled for Aug. 23 has also been canceled. This is no surprise given that the 2020 Major League Baseball season remains very much up in the air.