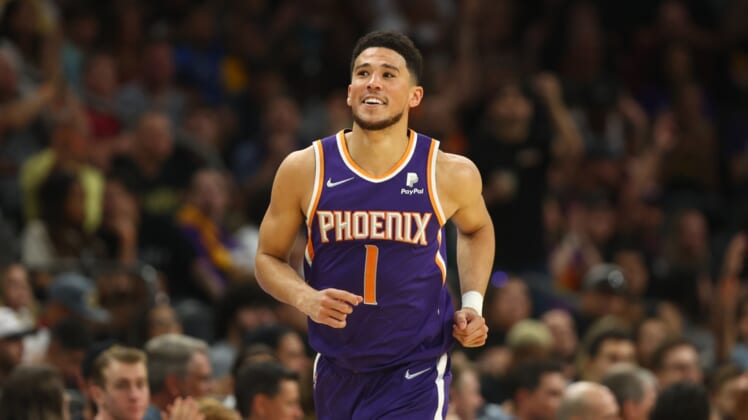 No matter what the Phoenix Suns do Wednesday in their road matchup with the Los Angeles Clippers, it will be tough to match what they achieved Tuesday.

The Suns not only eliminated the Los Angeles Lakers from playoff contention with a convincing 121-110 home victory, but they earned their 63rd victory of the season to set a franchise record.

“It’s hard to put it into words, but we’re all pretty grateful,” Suns coach Monty Williams said about the milestone victory. “We talk about celebrating everything, and there are so many people who are a big part in this from the players who are the main cogs in it all and in particular to ownership.”

It took three tries for the Suns to get to win No. 63, as they lost at Memphis and Oklahoma City over the weekend before having their way with the Lakers in the second half. Devin Booker finished with 32 points against Los Angeles while Deandre Ayton had 22 points and 13 rebounds.

Not a lot will be at stake Wednesday. The Suns (63-16) already have wrapped up the top spot in the Western Conference and the Clippers (39-40) are locked in as the No. 8 team, with a spot in the play-in tournament awaiting.

Each team went 4-0 against the Lakers on the season.

The last time the teams played at Los Angeles, the Clippers pulled off a 111-95 victory on Dec. 13, one of two defeats in a stretch of 27 games for the Suns as they opened the season with a 26-5 record.

The Clippers have struggled since a five-game winning streak ended in early March. They are just 5-9 since but are coming off consecutive victories for the first time since that five-game run. Los Angeles defeated the New Orleans Pelicans 119-100 at home on Sunday after a 153-119 road rout of the Milwaukee Bucks on Friday.

“Just focus on playing the right way, getting into the paint, moving the ball, making the right pass — we did that all night (Sunday),” Clippers head coach Tyronn Lue said. “We had another 33-assist game. Just continue to keep building good habits.”

The Clippers’ Paul George has averaged 23.7 points in three games since returning from a two-month absence caused by an elbow injury. Norman Powell (foot) could return as early as Wednesday and Kawhi Leonard (knee) has ramped up activity after not playing all season.

The Suns are simply playing out the string at this point with a game coming at Utah on Friday before the regular-season finale Sunday at home against the Sacramento Kings.

In his first five games after returning from a broken right thumb, Suns point guard Chris Paul averaged 14 points and 11 assists in 32.3 minutes per contest. On Tuesday, he worked to get others involved, finishing with six points on just seven shots while collecting 12 assists over 24 minutes.