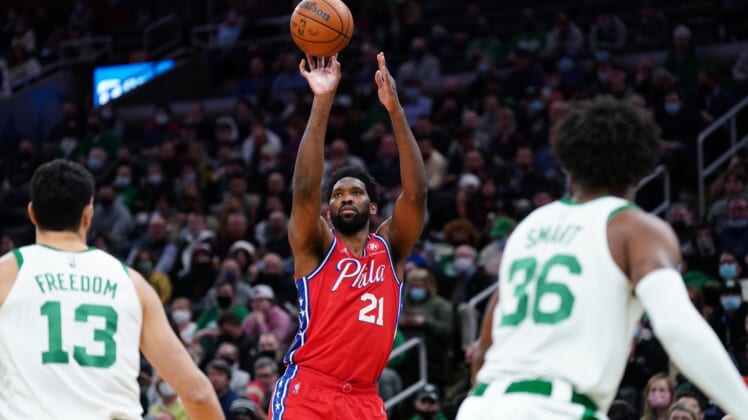 Joel Embiid missed several weeks earlier this season in the league’s health and safety protocols, and the Philadelphia 76ers are thankful the All-Star is back.

Embiid willed the Sixers to a 108-103 road win over the Boston Celtics on Monday with 41 points, 10 rebounds, five assists and four blocked shots. He scored 17 points in the fourth quarter.

The Sixers will likely need another strong performance from Embiid when they host the Atlanta Hawks on Thursday.

The Sixers are expected to be depleted again when the Hawks visit.

“I thought we had a calm (presence),” Sixers head coach Doc Rivers said. “I thought the guys were in a great mental place. They really wanted it. You could sense it.”

Embiid set the tone early and closed the game with several clutch shots for his third career effort with at least 40 points, 10 rebounds, five assists and four blocked shots.

“What we talk about with him every day is make or miss, just get your shot,” Rivers said. “Get the shot you want, and I thought he did that.”

Embiid knocked down an extremely difficult fadeaway 17-footer from the corner to seal the win for the short-handed Sixers.

“In that situation, I thought I had a good angle, and I had been making shots,” Embiid said. “I thought it was a great shot.”

The Hawks will enter this matchup in a more fragile state than the Sixers.

The likewise-depleted Hawks fell 104-98 to the Orlando Magic on Wednesday.

Desperate for depth, the Hawks signed Lance Stephenson and Malcolm Hill and are also expected to add Wes Iwundu before the game in Philadelphia.

In this bizarre season, the Hawks have been forced to compete under these circumstances.

“We have to adjust to it, and get our guys ready to go,” Hawks coach Nate McMillan said. “That’s what we talked about (Wednesday) morning. We can’t allow this to be a distraction. It is, but we’ve got to get past that.

“The fact that we had, what, three (more) guys test positive and was sent home and was put into protocol, and all the sudden, you think you have a guy available and a result comes back and he goes into protocols,” McMillan said.

Virtually every team has been affected by COVID-19 in one way or another this season. Thursday’s matchup will look far different than last season’s Eastern Conference semifinal playoff series.

“We have to come out with that energy and that effort we’ve been talking about, no matter who is in uniform,” McMillan said. “We’ve got to execute better, even though we’ve got a few new faces that will be out on the floor.”