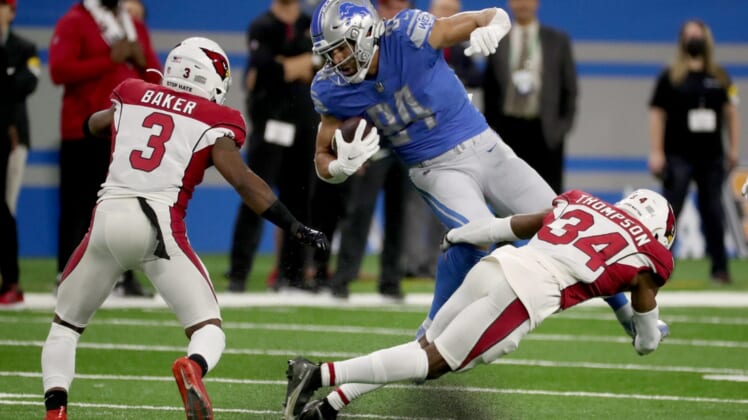 The Detroit Lions no longer have the NFL’s worst record. While some fans would rather have the top pick in the draft, the Lions would enjoy some time out of the basement.

The Lions have won two of their last three games and have actually been very competitive since their bye in Week 9. They’ve also had a tie and two close losses during that stretch and will look to remain on the upswing when they visit the Atlanta Falcons on Sunday.

“Things are coming together the way you want them to and now we’ve got to keep getting better,” Detroit coach Dan Campbell said. “You’d like to think we can continue down this road.”

Detroit (2-11-1) pulled one of the biggest upsets of the season on Sunday, pounding Arizona 30-12. Jared Goff threw three touchdown passes and the defense didn’t allow a touchdown until there were less than five minutes remaining.

Unfortunately, Goff tested positive on Monday and was placed on the reserve/COVID list. The team remains hopeful Goff will be removed from the list before Sunday’s game. He has continued to game plan remotely in anticipation of that happening.

“It’s like he’s here as much as he can be without actually being in the building,” Campbell said. “He’s preparing that way and we’ll see where it goes.”

The Falcons are looking at the situation the same way.

“I don’t know Jared’s situation but I imagine he’s got a good chance to play,” Atlanta coach Arthur Smith said. “You’ve got to prepare as if he will play and then you have your contingency plan. You’ve always got to be aware who the backups are.”

Tim Boyle is next on the depth chart. The Lions could get their top running back in action. D’Andre Swift, who suffered a shoulder injury on Thanksgiving Day, returned to practice on Wednesday.

“I want to know that he’s not thinking about his shoulder. That’s really the last part of this, that he has confidence in himself to take a shot,” Campbell said. “That’s what you’re going to be looking for.”

The Falcons (6-8) are coming off a 31-13 loss to San Francisco. Their running game failed to get untracked (62 yards), the primary reason why Atlanta went 1-for-5 in the red zone. The 49ers cashed in on four of five red zone opportunities.

Russell Gage led the receiving corps with eight receptions for 91 yards and the Falcons’ lone touchdown. He caught a career-high 11 passes in Atlanta’s last home game, a 30-17 loss to the Tampa Bay Buccaneers on Dec. 5.

“My confidence has always been high in Russ,” quarterback Matt Ryan said. “He’s another guy who started out on the practice squad and then got opportunities and continued to get better. He worked at it and has really turned into a very good player.”

Rookie tight end Kyle Pitts caught four passes for 77 yards and has notched at least four receptions in each of the last three games.

“He’s been exactly who we thought he was,” Smith said of the first-round pick. “He’s impacted the game immensely, even when the ball wasn’t going his way. He’s not even scratched the surface. He’s going to have a really productive year.”