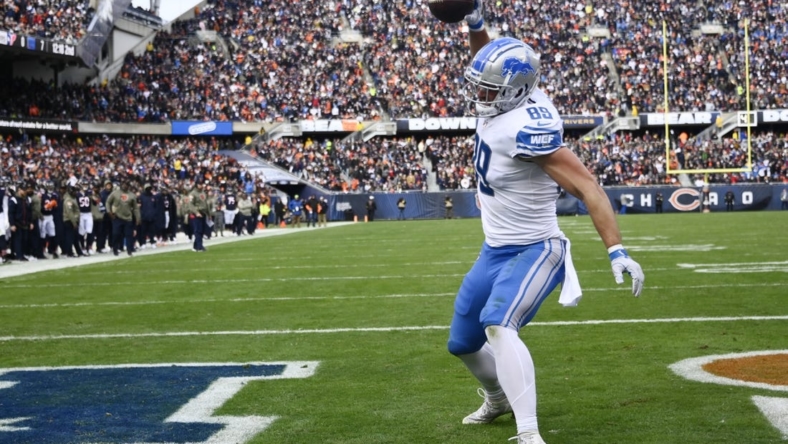 Jamaal Williams scored on a 1-yard plunge for the go-ahead score as the Detroit Lions rallied from a 14-point fourth-quarter deficit to defeat the host Chicago Bears 31-30 on Sunday.

Jared Goff passed for 236 yards and a touchdown and Amon-Ra St. Brown made 10 receptions for 119 yards. Williams ran for 59 yards on 16 carries.

Jeff Okudah returned an interception for a touchdown.

Goff found an open Brock Wright for a 2-yard touchdown midway through the second quarter.

The Bears then embarked on a methodical 15-play, 75-yard drive that Fields ended with a 1-yard scramble into the end zone.

A 10-play, 76-yard drive in the third quarter gave Chicago the lead. Fields found Kmet for a 6-yard score to finish it off.

Later in the quarter, Fields took advantage of a blown coverage and found a wide-open Kmet on a 50-yard touchdown to make it 24-10.

Detroit benefitted from three Chicago penalties on one drive to cut the Bears’ lead in half. D’Andre Swift scored on a 9-yard run with 11:37 remaining.

Just over a minute later, Okudah picked off Fields’ pass intended for Kmet and returned it 20 yards to allow the Lions to tie the score.

That didn’t last long. Fields faked a handoff and raced past the defense for a 67-yard touchdown with 9:11 remaining. Chicago missed the extra point, leaving the score at 30-24.

Detroit regained the lead with 2:21 to go. Goff threw a 44-yard pass to Tom Kennedy and a 13-yarder to St. Brown before Williams scored from 1 yard out. Badgley’s extra point gave the Lions their only lead since 10-3.