3 lineup combinations the Philadelphia 76ers should experiment with

During the Philadelphia 76ers’ matchup against the Los Angeles Lakers, Doc Rivers decided to shake things up. Despite the squad being fully healthy, he opted to bring rising star Tyrese Maxey off the bench.

Following the game, Rivers was asked about the decision to have Maxey run with the second unit instead of his typical starting role. Rivers responded by saying the team will have three different starting lineups moving forward, depending on the matchup.

“We told our team that’s three lineups that we’ll be using for this point on. We were going to do it in the Utah game, but Tobias was out, but they know the lineups, I’m not going to share them, but there’s three different lineups we’ll use on different nights.”

With Rivers broadening his lineups moving forward, here are three combinations he should consider trying.

Depending on the matchup, the Sixers should be able to get away with a three-guard starting lineup. De’Anthony Melton’s defensive prowess and James Harden’s size should allow them to get away with running this smaller group.

Through the first half of the season, the addition of Melton has proven to be a great find from Daryl Morey. His two-way play has allowed him to thrive alongside both Harden and Tyrese Maxey.

When Maxey was sidelined due to injury, Melton stepped up in a big way. As a starter this season, he is averaging 11.8 PPG and shooting 39.4% from three on almost six attempts per game.

With this lineup, the Sixers will have an abundance of ball-handling, shot creation, and outside shooting. Most of all, it can completely open the floor for Joel Embiid to damage in the mid-range and around the rim. It would not be surprising if this is one of the starting lineups coach Rivers already has in mind. 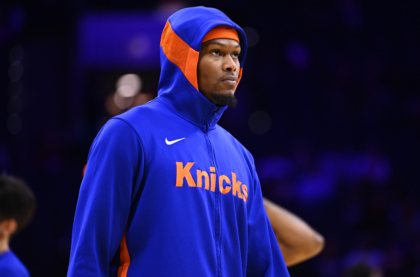 This is another lineup combination with a heavy focus on the defensive end. Melton, Harris, and Matisse Thybulle are arguably the Sixers’ top perimeter defenders. Rolling them out together would allow them to switch almost everything.

Thybulle hasn’t gotten as much playing time as he used to this season, but he can still be an impact player. So far this season, he is among the team leaders in plus/minus (+1.5). His offensive shortcomings have hurt him in the past, but that won’t be a problem with this lineup.

When Harden joined the lineup last year, Thybulle was one of the biggest benefactors. Playing alongside an elite playmaker did wonders for his offense. Following the All-Star break last year, Thybulle averaged six points per game while shooting 52% from the field and 38.5% from deep.

With the floor properly spaced, Thybulle can be utilized as a screener and cutter. Given the defensive potential of this five-man unit, it’s worth giving a try in the regular season.

This lineup might be obvious, but it still needs to be mentioned. Doc Rivers should experiment now, but this group must get its fair share of reps in the coming months.

Even with the defensive issues in the backcourt, this is the lineup the Sixers will need in the postseason. Shot creation and ball handling are a must in the playoffs, which is why this unit has to find a way to make it work.

Due to multiple injuries early in the year, the ‘starting lineup’ hasn’t gotten much time together. With that in mind, it’s not something Rivers can completely abandon.

When there are five minutes left in a tight playoff game, this is the unit Rivers is going to need on the floor. Harden and Maxey are the best shot creators, while Harris and P.J. Tucker are spacing the floor and being hard-nosed defenders.

In the modern NBA, small ball has become a common practice. With the group of forwards the Sixers have on the roster, it is something the team could get away with in short spurts.

With this five-man group, the Sixers’ defense will also be able to switch everything. There might be no true center, but Danuel House, Harris, and Tucker should hold their own on the glass.

On the offensive end, Harden could open the floor completely and go to work. Having five capable shooters invites a spaced-out offense that can generate a large number of threes and layups. Rivers has liked the “big-small lineups” in the past, so there is a chance he would bite on something like this.