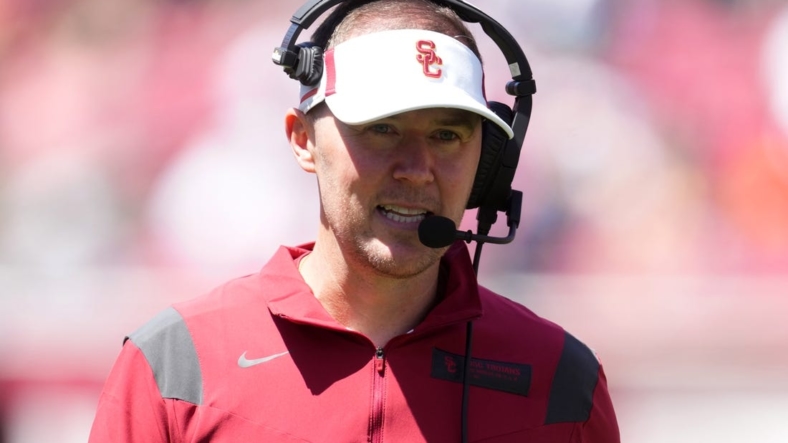 No. 14 Southern California officially kicks off the Lincoln Riley era Saturday when it welcomes visiting Rice to Los Angeles for both teams’ 2022 season opener.

The Trojans scored perhaps the most surprising coup of the offseason coaching carousel when it hired four-time Big 12 Conference champion Lincoln Riley to replace Clay Helton.

At USC, Riley inherits a much different situation with the Trojans coming off a 4-8 finish, the program’s worst record since 1991. Helton’s turbulent tenure — which peaked with a Rose Bowl win in the 2016 season and Pac-12 title in 2017 — ended after a Week 2 loss to Stanford.

USC limped to its second sub-.500 finish in four years, including a brutal 62-33 defeat to rival UCLA, but opens the new season with reason for optimism. Credit the transfer portal.

In addition to Riley, the Trojans added a pair of imports from Oklahoma in quarterback Caleb Williams and wide receiver Mario Williams. Caleb Williams entered into the Heisman Trophy conversation after winning the Sooners’ starting quarterback job in October, and concluded the 2021 campaign with 1,912 yards passing, 21 touchdowns through the air, and another 442 yards and six scores on the ground.

His rotation of pass-catchers include 2021 Biletnikoff Award winner Jordan Addison, who caught 100 passes for 1,593 yards and 17 touchdowns at Pitt; and Brenden Rice, son of Jerry Rice, who hauled in 299 yards and three scores last season at Colorado.

Running back Travis Dye also comes in via transfer. Dye rushed for 1,271 yards and 16 touchdowns along with 402 yards and two scores receiving for Oregon a year ago.

The defense also got a boost with the transfer of linebacker Shane Lee from Alabama, but that side of the ball is a question mark for the Trojans after surrendering 31.8 points per game.

“I like what I’ve seen up to this point,” Riley said of the defense Tuesday. “We’ve developed a nice core of guys that we trust doing their job … We want to add more to that group.”

Rice opens 2022 having last finished above .500 in 2014, when they played in the Hawaii Bowl for the program’s third-consecutive bowl bid. The wait to appear in another one continues.

The Owls are coming off their best finish in Mike Bloomgren’s tenure as head coach, going 4-8 in 2021.

Rice returns leading rusher Ari Broussard, who posted 560 yards last season, and receiver Cedric Patterson III off a six-touchdown campaign. On the other side of the ball, defensive backs Gabe Taylor, Kirk Lockhart and Miles McCord combined for six interceptions.

Pressure from the front seven contributed to the takeaway opportunities, and the return of defensive end Ikenna Enechukwu and linebacker Josh Pearcy give the Owls pass-rushers with a combined 8.5 sacks last year.

Added Bloomgren: “I think our offensive line is the best it’s ever been. A pretty solid group there … I think up front is going to be fun on both sides of the football.”