Lightning’s Nikita Kucherov in, Brayden Point out for Game 4 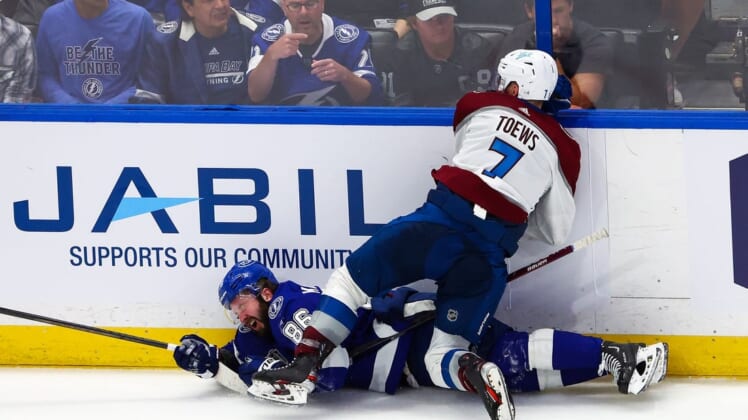 Forward Nikita Kucherov will be in the lineup Wednesday night when the Tampa Bay Lightning host the Colorado Avalanche in Game 4 of the Stanley Cup Final.

Coach Jon Cooper confirmed Wednesday morning that the Lightning will use the same lineup as in Game 3.

Brayden Point, who did not play in Tampa Bay’s 6-2 win in Game 3 on Monday, will sit out Game 4 as well.

“I haven’t ruled him out for the series, but he’s out for tonight,” Cooper said of Point.

Forward Nick Paul will remain in the lineup for the Lightning, who trail 2-1 in the best-of-seven series.

Kucherov was headed toward the boards when Toews hit him, and his left leg buckled. The former Hart Trophy recipient attempted to take part in the ensuing five-on-three power play but left the ice in discomfort.

He collected two assists in the game, giving him 25 points in each of the Lightning’s three consecutive Stanley Cup years. He is the fourth player in league history with three straight 25-point postseasons, joining Bryan Trottier (1980-82), Mike Bossy (1981-83) and Wayne Gretzky (1983-85).

Point sustained a lower-body injury on May 14 in Game 7 of the first-round series against the Toronto Maple Leafs. He missed the team’s next 10 games before returning for the series opener against the Avalanche.