Lightning visit Kraken at end of a rough road trip 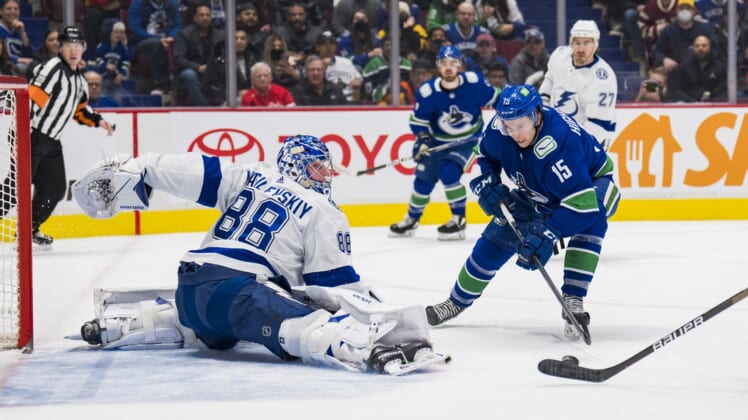 The road has been a bit bumpy for the Tampa Bay Lightning recently, and they undoubtelwon’t be disappointed when their six-game trip concludes Wednesday night in Seattle.

They were on the bus to the airport following that game when they learned their flight to Vancouver for Sunday’s contest had been canceled due to mechanical issues.

“Vasy (goaltender Andrei Vasilevskiy) put it right, it was better we found out when we were on the ground than up in the air,” Lightning coach Jon Cooper said.

The Lightning stayed an extra night in Edmonton, lost an hour of sleep because of Daylight Saving Time and didn’t get checked in at their Vancouver hotel until about 3 p.m. Sunday — four hours before the puck was to drop against the Canucks.

The Lightning overcame those obstacles, scored twice in the opening six minutes and held on to win 2-1 as Vasilevskiy made 35 saves.

“It was one of the tougher back-to-backs we’ve had,” Lightning alternate captain Alex Killorn said. “It’s kind of the way things were going on this road trip. We were kind of struggling the past couple games and it was just a little more adversity for us. Really happy with the way the team played for most of the game (Sunday).”

Victor Hedman and Ross Colton scored for the Lightning, who are chasing Florida in the NHL’s Atlantic Division.

“Talking to the guys, we didn’t want to have any of this travel and all the issues we had (Saturday) and the late night and say, ‘Well, we’re going to mail this game in,'” Cooper said. “No excuses from this group, and they came through.”

The expansion Kraken return home after a 1-3-1 trip that culminated with a 4-3 shootout victory Saturday in Montreal. Philipp Grubauer made 30 saves and then stopped all seven Canadiens attempts in the shootout.

“We didn’t want to go home without a win,” Grubauer said. “That was a hard-earned win for sure. I think the last period (when the Canadiens rallied from a two-goal deficit) we made it way too interesting, but we found a way to win it and get two points out of it and we get to go home.

“And we’ve got to take that momentum and how we played in the first two periods to our home.”

The Canadiens’ tying goal, with 2:12 remaining in regulation, came on a seemingly benign pass from the point that deflected off the skate of Seattle defenseman Adam Larsson.

“That’s hockey. It’s just the way it goes,” said Kraken forward Jared McCann, who earlier scored his team-leading 23rd goal of the season. “(Larsson) tried to make a play, everybody saw that, so we were there for him. He’s done a lot of great things for us this year, so we just stuck with him. It’s good to get the win for him.”

The Lightning beat the Kraken 3-0 in their previous meeting Nov. 26 in the Lightning’s home arena.