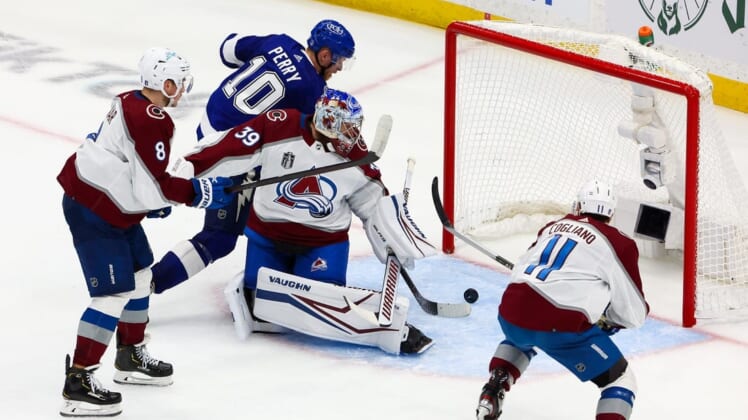 Steven Stamkos, Ondrej Palat and Pat Maroon all collected one goal and one assist and spearheaded a four-goal second period that sparked the host Tampa Bay Lightning to a 6-2 win over the Colorado Avalanche on Monday in Game 3 of the Stanley Cup Final.

Colorado leads the best-of-seven series 2-1. The two-time champion Lightning will try to even the series at home on Wednesday.

After Landeskog’s power-play goal opened the scoring at 8:19, the Lightning roared back.

Cirelli’s second goal of the playoffs tied the game five minutes later. He lost possession while cutting to the net, but the puck slipped past Kuemper. Then Palat put the hosts ahead at 14:54 when he completed a give-and-go with Stamkos for his 10th goal of the playoffs, Tampa’s first lead of the series.

Paul, who was hurt in the first period but returned despite obvious discomfort, scored the eventual game-winning goal 86 seconds into the second period when he ripped home a shot from the slot for his fifth of the playoffs.

Landeskog’s second power-play goal at 4:43 of the period, his 11th of the playoffs, made it a one-goal game, but Stamkos restored the two-goal edge three minutes later with a top-shelf shot for his 10th goal of the playoffs.

Maroon deposited a backhand from the doorstep at 11:15 of the period, his fourth goal of the playoffs. It spelled the end of the game for Kuemper, but the change didn’t help the visitors.

Perry netted his team’s first power-play goal of the series with 5:02 remaining in the one-sided middle frame, which made him the first player in history to score a Cup Final goal with four different teams (Anaheim Ducks, Dallas Stars, Montreal Canadiens and Tampa Bay).