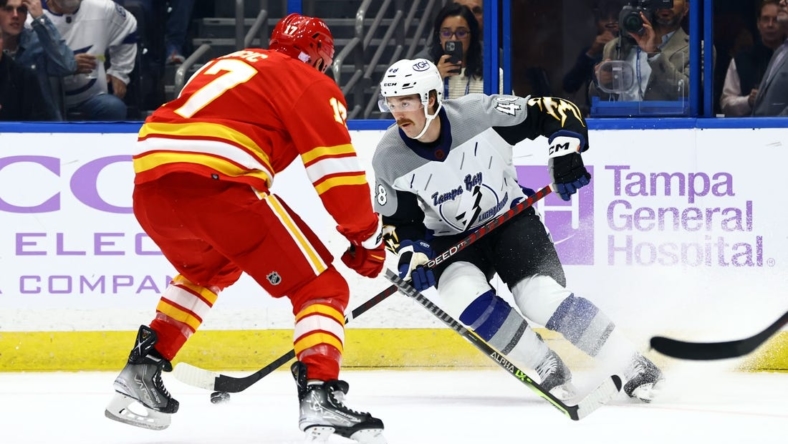 Tampa Bay’s Nikita Kucherov scored twice, Steven Stamkos had a goal and an assist, and the Lightning swept their three-game homestand by beating the Calgary Flames 4-1 on Thursday.

In moving to 4-2-0 this season against the Western Conference, the Lightning improved to 6-2-1 at home. They beat the Washington Capitals 6-3 on Sunday and topped the Dallas Stars 5-4 in overtime on Tuesday.

And they did all of that despite being outshot by the Flames 40-23 in the first meeting between the teams this season.

Elias Lindholm scored for the Flames and Jacob Markstrom stopped 20 of 23 shots. But they dropped to 2-6-2 over their last 10 games.

In the first match of its season-long six-game road trip, Calgary seemed to strike first at 7:28 when Milan Lucic skated into the left circle and beat Vasilevskiy with a wrister on the short side. But the Lightning challenged for an offside infraction, and the play was quickly overturned.

Less than a minute later, Stamkos put his club up 1-0 when found a puck near the high slot, moved to the left circle and zipped in his ninth tally by beating Markstrom on the glove side.

In the second frame, the home side added on late on its first power play. After Rasmus Andersson was sent off for holding Stamkos, the Lightning captain made the Flames pay by finishing some good puck movement with a feed to Kucherov. The right wing blistered a one-timer from right dot at 18:16.

On their third power play, the Flames finally connected when Lindholm’s long shot found its way through a Nazem Kadri screen and in for his seventh tally at 4:53 of the third. But defenseman Myers finally scored in his 10th Lightning game just 10 seconds later to restore the two-goal edge.

With 1:45 remaining, Calgary pulled Markstrom off the ice in favor of an extra skater. However, Kucherov iced the win with an empty-net goal — his ninth overall thus far — with 14 seconds to play.