Lightning top Canadiens in OT in NHL’s return from pause 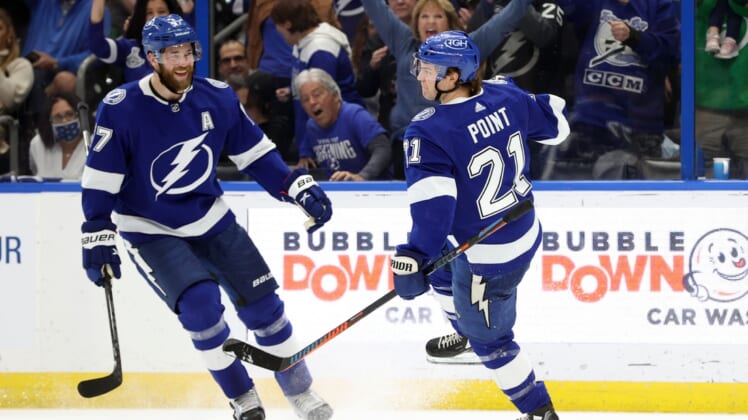 Ondrej Palat scored the game-winner 36 seconds into overtime as the host Tampa Bay Lightning topped the beleaguered Montreal Canadiens 5-4 on Tuesday in the first game since a six-day league-wide pause.

Steven Stamkos forced a turnover in front of Montreal goalie Sam Montembeault, and Victor Hedman fed Palat for the triumphant marker as the Lightning improved to 8-4 in overtime and won their sixth straight regular-season game over the Canadiens.

Brayden Point returned to the lineup for the first time since Nov. 20 and scored twice with an assist, and Ross Colton and Corey Perry (one goal, one assist) also tallied for Tampa Bay, which has won seven consecutive on home ice.

In the absence of goalie tandem Andrei Vasilevskiy and Brian Elliott — both in COVID-19 protocol — American Hockey League call-up Maxime Lagace made 27 saves for the win.

Montreal’s Rafael Harvey-Pinard scored and Corey Schueneman earned an assist on the goal in their NHL debuts.

Kale Clague scored his first NHL goal in his 39th game, and Lukas Vejdemo and David Savard netted for the first time this season.

Montembeault started his first game since Nov. 26 and was strong in net with 32 saves, including a pair of breakaways on Killorn.

Brendan Gallagher returned for his first match since Nov. 29 and played on the top line.

Without nine players due to protocol for the virus, the Canadiens failed in their bid to record consecutive wins for the first time this year.

In just his eighth career game and first this season, Vejdemo tapped his second career goal into an open net at 10:46.

Point answered twice in a span of 2:32 for the home side’s first lead.

The Quebec-born Harvey-Pinard tied the match 2:05 into the second when he angled in his first-ever goal from the low slot off a dish from Sami Niku.

Colton one-timed his third goal of the year at 8:11.

In the final period, Clague blasted his first goal from the left circle at 6:11 for the game’s third tie, and Savard intercepted a pass and popped in a forehand shot at 13:09.

Perry knotted it again with just 20 seconds left and Lagace pulled for the extra skater.