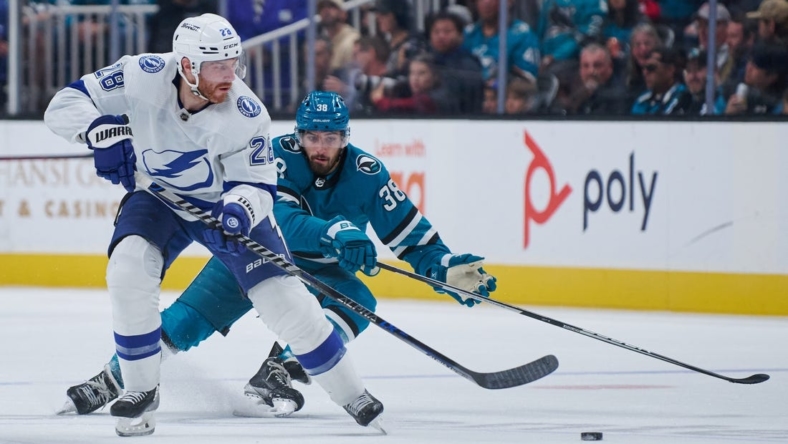 Nikita Kucherov chipped in the tiebreaking goal just inside the final minute as the Tampa Bay Lightning wrapped up their three-game California road trip with a 4-3 win over the host San Jose Sharks on Saturday afternoon.

With Brayden Point leading a break and then slipping a cross-ice pass over to Brandon Hagel, Kucherov finished off the set of fine feeds by tapping in his third goal at the far post with 57 seconds remaining.

Alex Killorn had a goal and an assist, and Victor Hedman and Ross Colton scored. Point and Hagel had two assists apiece. Andrei Vasilevskiy moved to 3-3-0 with 24 saves as the Lightning went 2-1-0 on their trip.

San Jose’s Erik Karlsson tallied at even strength and on the power play, and Nico Sturm scored. Tomas Hertl had two assists, while James Reimer made 22 saves.

In the matinee affair, the first meeting between the clubs had a fast start to it by Swedish defensemen shooting the puck right away.

Tampa Bay’s Hedman notched his first goal of the season when he took a feed from Point and beat Reimer just 32 seconds into the contest. Karlsson matched his countryman after an errant flip by Steven Stamkos by scoring 50 seconds later — both markers coming on the first shot by each side.

But just after the match’s first power play ended, Colton found the net for the second time from out near the back post at 13:44 to give the visitors a 2-1 lead they held after 20 minutes.

Hedman, who left the ice early in the period and went to the dressing room, returned later in the frame and skated just five shifts for 3:57 of ice time.

In the second, first-year Sharks forward Sturm tied the game for a second time with his fifth goal. Trailing Luke Kunin, Sturm received a drop-pass from the center and ripped home the tying goal at 5:36.

The Lightning grabbed their third lead when Killorn took a slick pass from Nicholas Paul and potted his second goal by beating Reimer between the pads from the right circle with 1:19 remaining in the period.

However, on a face-off win by Hertl and a pass back from Timo Meier, Karlsson blasted his team-leading sixth marker at 4:34 to knot it at 3.