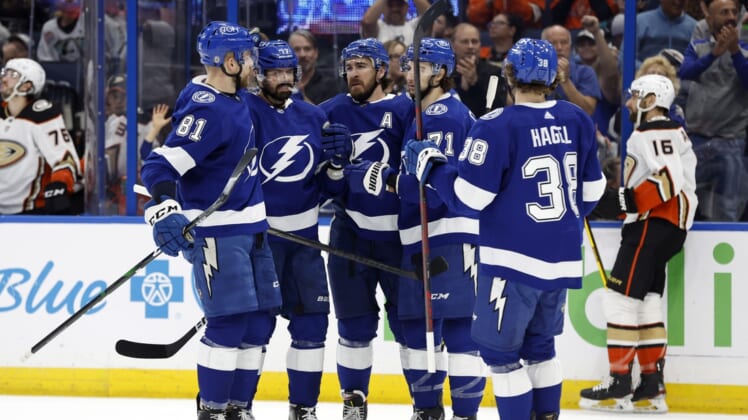 Nikita Kucherov scored with 12.3 seconds left in regulation and Anthony Cirelli tallied at 1:58 of overtime to lift the Tampa Bay Lightning to a 4-3 win against the visiting Anaheim Ducks on Thursday.

Cirelli and Alex Killorn each finished with a goal and an assist, while Ross Colton also scored in the opener of a five-game homestand. Andrei Vasilevskiy stopped 10 of 13 shots before he was pulled for the first time in more than five years.

Adam Henrique scored two goals, Troy Terry also scored, Ryan Getzlaf had two assists, and Anthony Stolarz made 27 saves in the finale of the four-game road trip for the Ducks (29-33-14, 72 points), who have lost 16 of their past 18 games.

Kucherov scored with Elliott pulled for the extra attacker to tie the score 3-3, as his shot from the high slot snuck through traffic. Killorn set up Cirelli on the doorstep for the decisive tap-in.

The Ducks initially fell behind 1-0 in the opening three minutes for the third time in the past four games. The Lightning forced a turnover in the Anaheim zone and Colton’s backhand went off Ducks defenseman Josh Mahura and into the net.

Killorn made it 2-0 at 16:42 of the first period. Cirelli won the puck in the corner and passed to Killorn, who stopped the puck and then scored with a wrist shot.

The Ducks struck back with three goals in the second period to move ahead 3-2.

Henrique made it 2-1 at 3:43 when he tipped in a point shot from Kevin Shattenkirk. The veteran center scored again at 10:19 to tie the score 2-2, scoring following a turnover on a wrist shot from the top of the left circle.

The goal was initially awarded to Terry on a deflection, but it was later determined the shot nicked off Tampa Bay defenseman Erik Cernak.

However, Terry actually did score on a tip 22 seconds later to give Anaheim a 3-2 lead.

Killorn had two goals waved off on offsides reviews, the potential tying goal with 5:40 left in the second period and the would-be game-winner a minute into overtime.